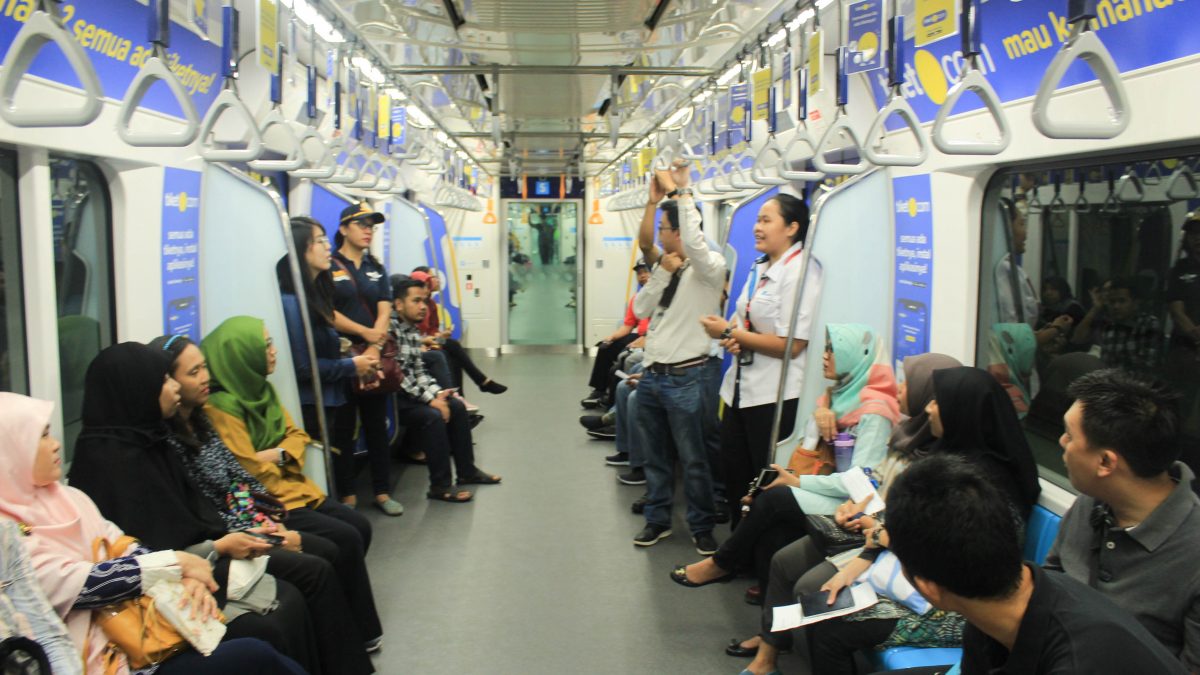 The event aimed to showcase the best practices supporting DKI Jakarta’s greenhouse gas (GHG) emission reduction agenda. The event also aimed to inspire other local government participants to build and plan cities and regencies that are sustainable and responsive to climate change.

DKI Jakarta serves as the model city of the IKI-funded project, Ambitious City Promises 1 implemented by ICLEI – Local Governments for Sustainability. This mobile workshop was co-organized with the Urban-LEDS II 2 project. The activity was supported by resource persons from DKI Jakarta’s Department of Transportation and the Environmental Service. Representatives from PT  Trans Jakarta who conveyed the history and development of public transport such as bus rapid transit (BRT) and mass rail transit (MRT) services in Jakarta were also present.

At the onset, Ms. Naning of DKI Jakarta’s Transportation Agency explained the city’s commitment to providing mass and environment-friendly transportation. She stressed that DKI Jakarta’s efforts to develop road infrastructure to support citizen mobility started since 2004 along with the emergence of regional regulations concerning air pollution control. This policy explicitly states that it is necessary to control air pollution from mobile sources including motor vehicles.

This was further strengthened by Governor Regulation No. 131 of 2012 concerning DKI Jakarta’s GHG Emission Reduction Action Plan (RAD GRK) where the energy sector and motor vehicles are identified as major sources of GHG emissions. Hence, DKI Jakarta prioritizes programs on the development of mass transportation, improvement of pedestrian infrastructure and facilities, and the creation of bicycle lanes.

MRT public relations official, Kartika Tri Utami, stated that the MRT officially started its operation last 01 March 2019. To date, it carries an average of 78,000 passengers per day but it is expected that this will increase to 150,000 passengers per day once the facility is fully operational. The MRT is committed to serving the Jakarta public in supporting daily mobility and the agenda of reducing GHG emissions. The MRT also promotes its so-called BMW campaign which stands for “Bus, MRT, and Walking.”

Meanwhile, the PT TransJakarta management, represented by Mr. Wibowo, stated that TransJakarta, the city’s BRT system, currently has 13 corridors and serves as many as 668,000 passengers/day throughout the DKI Jakarta area. Several corridors have been connected to other transportation modes such as the MRT, Commuter Line, and feeder buses from the cities around Jakarta such as Bogor, Depok, Bekasi, and Tangerang.

Ms. Susi Andriani of DKI Jakarta’s Environmental Service explained the importance of collaboration between local government and communities. She said that leaders who mobilize the village people have very high commitment and dedication; these local champions help make the villages become green and sustainable by encouraging citizens to properly manage their waste and start urban farming.

Representing the residents, Mr. R.B. Sutamo, said: “We are grateful if we get assistance and guidance from the government or business world, but if we don’t, we will continue to run and continue to develop creative initiatives so we can continue to survive in greening this village.” Initially, he explained that it was not easy to make residents understand the importance of environmental protection and waste management.

However, after showing proof of concept that proper waste management can be an economic opportunity, residents became more interested in the waste bank scheme. Under this scheme, residents can sell their organic waste containing plastic, steel, paper, aluminum, etc. In the long run, residents were also encouraged to start making compost, which is then used for urban gardens. Produce from the urban gardens can later be sold to local markets which serve as residents’ additional income. Through this approach, urban farming and gardening activities expanded in the village contributing both to environmental sustainability and local economic development.

REPLICATING LESSONS FROM THE FIELD

ICLEI Indonesia Country Manager Gina Karina added that this activity was a good culmination of the series of activities that ICLEI Indonesia organized including the Talanoa Dialogue and SIGN Smart Training. “The mobile workshop allowed participants from outside Jakarta to take lessons and knowledge to develop [their] low emission development plans,” she said.