How Rwanda is making its cities resilient and providing its people with secure, healthy futures 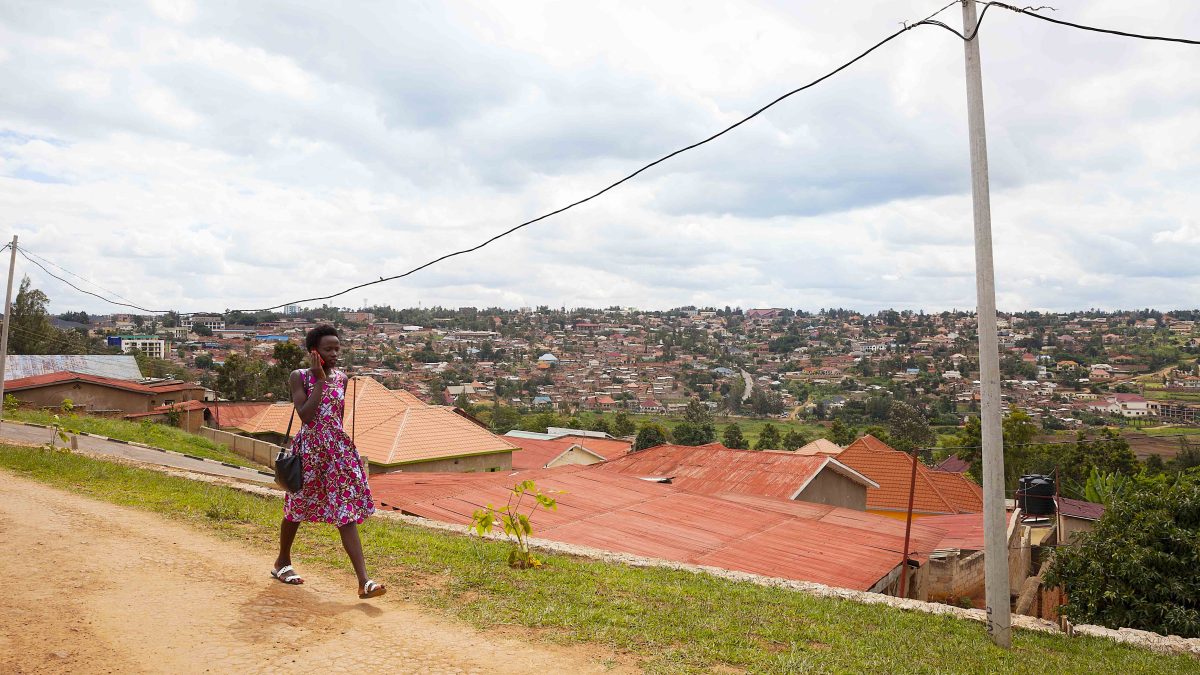 May 21, 2017 - Kigali, Rwanda: Woman talking on cell phone walking outdoors in Kigali, with city view of rooftops and houses.

Rwanda has ambitious plans for taking climate action and its cities are feeding into these plans with tangible actions that will not only contribute to the country’s overall climate goals, but also provide the growing urban population with the type of infrastructure projects that will increase their quality of life while protecting the environment.

Here are stories from the Urban-LEDS project implementation 2017-2021 in Rwanda and three of the participating Districts: Kigali, Muhanga and Rubavu.

For cities in Africa, climate action planning is a crucial first step in getting low emission development projects off the ground. This is relevant for smaller cities and districts, like Muhanga and Rubavu, but also for large cities like the capital of Kigali.

As part of the Urban-LEDS II project, all three these cities recently completed, and got council approval for, an Integrated Climate Action and Low Emission Development Plan. Importantly, these plans align with the Nationally Determined Contribution (NDC) for Rwanda, which means it’s more likely the actions outlined in these plans will receive funding to turn them into a reality.

The plans developed for Kigali, Rubavu and Muhanga are particularly practical, focusing on how each city can implement climate actions that will benefit the city and country, while allowing officials to continue delivering on their mandates. The plans outline a number of actions the cities can take that are guaranteed to build resilience and ensure the city is prepared for future shocks, while limiting emissions as it grows. The focus is both on households and industry and include actions like implementing solar and hydro mini-grid systems, replacing traditional light bulbs with LED lamps, recovering and reusing organic waste to restoring soils, treating wastewater and reusing treated water and switching to sustainable pest management techniques.

In much of Africa, urban residents still rely on biomass and charcoal for cooking, which causes widespread deforestation. As part of their action plans, these three cities are planning to develop a sustainable charcoal value chain that can reduce the demand of wood in charcoal production and increase charcoal yields. The cities also plan to support national afforestation efforts by using of germplasm, species site matching, timing of tree planting, post planting care and mixed-species approaches.

To increase energy access while managing organic waste, these cities are also turning to biogas digesters to produce energy using organic waste, especially in the rural areas. The digesters that make use of human waste have the additional benefit of improving sanitation.

Another key driver of Africa’s economy remains the burning of fossil fuels, yet a key action for all three these cities is to support mines to phase out the reliance on fossil fuel and comply with energy efficiency and water conservation requirements.

Building resilience during a pandemic

Cities are the first responders to most shocks, as we’ve seen during the ongoing COVID-19 pandemic. This is why the ReCAP21 project supports cities in Rwanda, among others, to build climate resilience amid such a global challenge. The Rwandan cities taking part have been involved in co-designing and receiving resilience training to ensure their needs are met. Muhanga, the project’s deep-dive city, is also defining specific recovery actions that are included in their climate action plans. The District is receiving project concept development support for retrofitting health centres to have more sustainable water and energy management. These project proposals will then receive support to ultimately be submitted to potential funders.

The ReCAP21 project also provided all the participating cities with the chance to engage with different levels of government and officials for different sectors, virtually, in a manner that promotes open, honest conversation and where all participants are considered equal regardless of their designation. Opening the channels of communication in the way is key in driving the collaboration needed to ensure coordinated, resilient recovery.

A key barrier cities across the continent continue to face is accessing climate finance in order to bring these plans and training to fruition in the form of tangible, city-level projects. One of the ways in which ICLEI and partners are supporting cities to overcome this barrier is the Transformative Action Program (TAP), which takes local infrastructure project concepts, like the one mentioned above, and support cities to turn them into robust and bankable projects ready for financing.

In Muhanga, where Urban-LEDS II recently installed a series of solar street lights, the team used this pilot project to develop a TAP application for doing the same in the Rubavu District. A finance expert reviewed all the TAP applications, measuring it against a stringent bankability scorecard developed under Urban-LEDS II, and selected it for developing finance concept notes. A concept note for a financing mechanism for roll-out in Kigali was subsequently developed. This concept was submitted to funders and partners, such as FONERWA, for funding to develop a full feasibility study. This concept was also adjusted to be applicable to the Rubavu District.

Strengthening the urban dimension in the Rwanda’s NDC process

Enhancing the nexus between climate and urban agenda is at the center of the international debate and in the global agendas. It is recognised that “cities are where the climate battle will be won or lost”, and urban climate action cannot be seen as a separate item in the government planning framework. Applying an urban lens to the Nationally Determined Contribution (NDC) process can help identify sectoral targets and measures in urban mitigation and adaptation, and help prioritise urban climate actions across the sectors, allocating appropriate budget.

Rwanda has begun this path and submitted an updated NDC in May 2020, with a direct and strong urban content. As part of the Urban-LEDS II support, UN-Habitat helped the Rwanda Ministry of Finance and Economic Planning (MINECOFIN) to linking the NDC implementation to the urban planning framework of the country, enhancing the multi-governance approach.

The review of Kigali and Districts Master Plans provided the chance to select the urban actions that could effectively support the achievements of adaptation and mitigations targets in the cities, and develop a database of projects. The database fed the preparation of the NDC Implementation framework with more than 100 urban projects in multiple sectors, like Building and Infrastructure, Transport, Waste and Water management. Recently, Rwanda launched the NDC Implementation Framework, with almost 5% of projects in the Urbanisation and Rural Settlements area, and new urban-related projects in other sectors.

To advance the implementation of the NDC in the cities, UN-Habitat supported the capital Kigali in developing the application for the City Investment Facility call with an urban upgrading and rehousing project, example of good practice for efficient land use, reducing land consumption, improving waste and water management, and adopting green building construction systems and using of low-carbon materials.

Further, UN-Habitat supported the Government of Rwanda in preparing a project concept note to promote urban climate-resilience recovery. The project aims to upgradie central and market streets in the secondary and satellite cities of Rwanda to become green, vibrant, and prosperous streets and boost the economic recovery. The project supports climate resilient urbanisation, proposing non-motorised transport solutions and development of green multi-functional public spaces, integrating sustainable water management and nature-based solutions in the design. The project will contribute to reduce the greenhouse gas emissions from mobility, improve air quality, increase the green coverage, and encouraging the local economic development, by adopting urban integrated and climate solutions.

While the Urban-LEDS II and ReCAP 21 projects have both come to an end, these stories illustrate that the types of actions taken and support given focused on lasting solutions, not fleeting improvements. It empowered city officials with practical training, implemented sustainable infrastructure upgrades and made policy change to ensure cities receive their due recognition in national climate action planning.