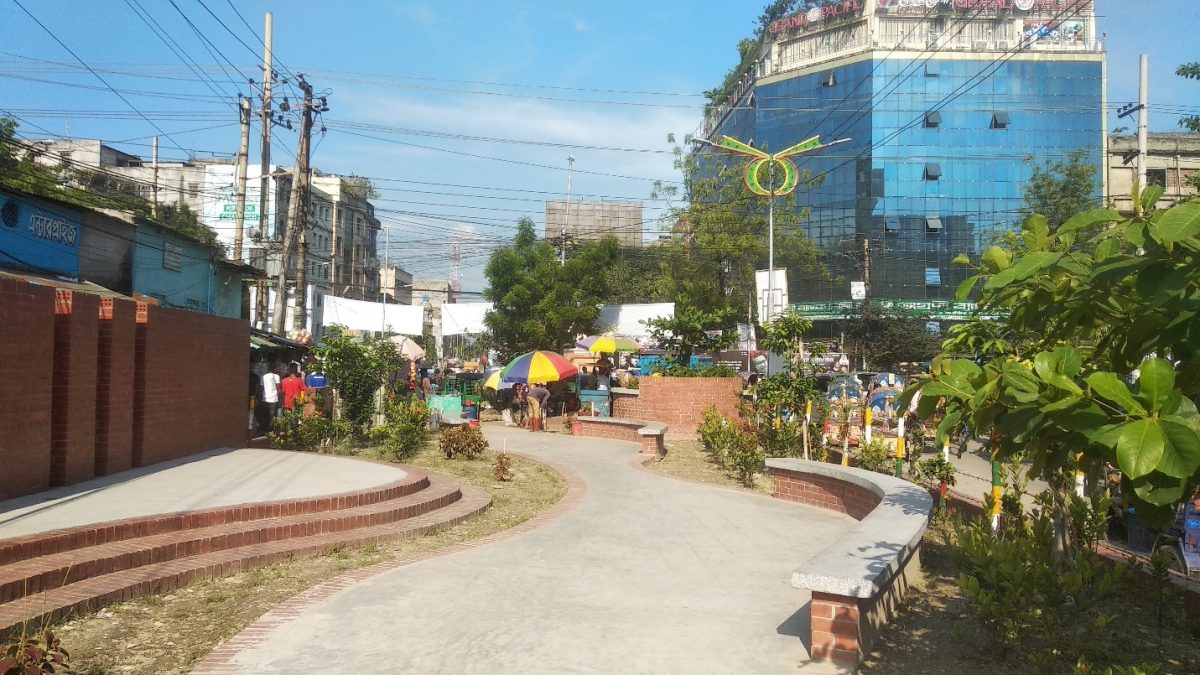 Bangabandhu Park, Narayanganj where one of the air quality sensors will be installed. Image credit: ICLEI SAS

Air quality monitoring for evidence-based management and creating public awareness: Narayanganj city is a historic center of trade and commerce and is located about 17 km to the southeast of the capital of Dhaka. This industrial city, famous for its textile and garments industries, is located besides the Dhaka-Chittagong highway and near the confluence of the rivers Shitalakshya and Buriganga. The port of Narayanganj is Bangladesh’s oldest, most famous, and busiest river ports, making it an important industrial center of the country.

In recent times, due to rapid economic development and industrialization, the city is facing environmental degradation challenges, with rising air pollution a concern in particular. Narayanganj is one of the cities with the most polluted air in the country, with its air pollution frequently reaching hazardous status in the Air Quality Index. While assessing the city’s climate risks and vulnerabilities, declining air quality was identified as a major environmental issue for the city. Therefore, the city of Narayanganj embarked on a pilot project to install Ambient Air Quality Monitoring systems (AAQMS), which will enable policy makers and planners to implement evidence-based air quality management practices and create public awareness.

As a preparatory baseline assessment for the pilot project, the Narayanganj City Corporation (NCC) along with the ICLEI South Asia team conducted site surveys and technical feasibility studies to identify suitable locations in the city for siting the pilot installations. Three locations namely Chasara intersection, Bangabandhu Park, and Sheikh Rasel City Park have been shortlisted to install the AAQMS. Three stationary sensor-based AAQMS with communication modules and data logging system will be setup under the pilot to help NCC monitor air quality data at different locations in the city. A LED display board will be setup at the NCC main administrative building to share air quality information and generate awareness within the community. The sensors, to be mounted on poles at a height of about nine feet above the ground, will monitor levels of pollutants including NO₂, SO₂, CO₂, O₃, particulate matter (PM2.5, PM10 and TPS) along with parameters such as temperature, relative humidity and noise. The air quality data will also be recorded and can be accessed through on an online portal. In addition to the stationary sensors, one portable air quality monitoring device will also be provided to help NCC monitor real-time air quality at different locations in the city and take corrective actions.

The pilot project is being implemented by an India based solution provider for smart air quality systems, supported by a local partner in Bangladesh. The sensors have been procured and shipped to Bangladesh, with preparatory technical site assessments underway to commence civil and electrical work for the sensor installation.

Rooftop solar photovoltaic systems on public buildings: In Narayanganj, electricity consumption in residential, commercial and institutional buildings contributed to 30% of the city’s total GHG emissions in 2018-19. To showcase renewables as an effective alternate and clean source of energy, the NCC has initiated installation of rooftop solar PV systems on two public buildings, supported by the Urban-LEDS II project. This pilot project not only intends to create public awareness but also to demonstrate the feasibility and contribute to the national efforts on increasing renewable energy adoption, especially solar PV systems that are emphasized in the country’s Nationally Determined Contribution (NDC).

For the Public library building, a grid-tied rooftop solar PV system of 11.76 kilowatt (kWp) size will be installed along with a net-metering capability. The Healthcare Centre located at Bandar faces frequent power cuts.  Thereby an off-grid rooftop solar PV system with Lithium-ion batteries will be established to improve the Healthcare Centre’s resilience. This off-grid system of 11.76 kWp with batteries will help provide back-up to critical loads. A solar PV systems supplier from Bangladesh will undertake the pilot implementation at both locations and the system components are currently being procured.