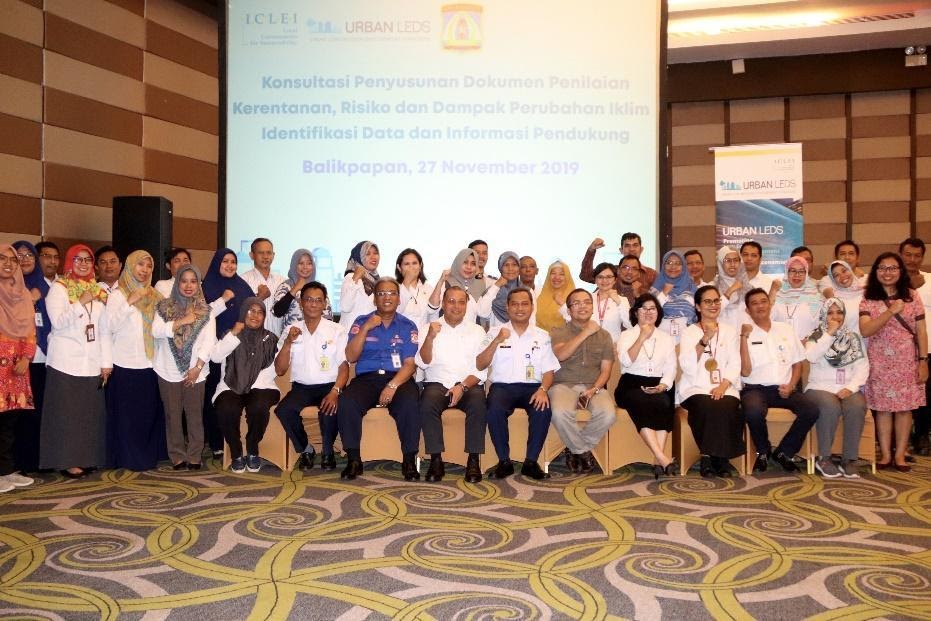 Climate risk and vulnerability assessments (CRVA) provide information that is critical in climate action planning. By knowing which resources are most vulnerable better enables the Government of Balikpapan city to set priorities for adaptation action and determining appropriate climate-smart responses.

Under the Urban-LEDS II Project, ICLEI Southeast Asia Secretariat (ICLEI SEAS) is supporting and guiding the review of climate action planning in the two model cities, Bogor and Balikpapan, ICLEI SEAS intends to enrich the climate change adaptation and resilience component of the cities’ action plan by providing support in the conduct of science-based climate risk and vulnerability assessment. This will complement the cities’ Urban-LEDS which was an output of the project’s first phase. Ultimately, the goal is to help the cities formulate an integrated climate action plan.

In line with this, ICLEI SEAS in collaboration with the City Government of Balikpapan conducted a consultation on CRVA held on 27 November 2019 at Swiss-Belhotel in Balikpapan. The activity focused on identifying the resources, systems or population that are likely to be most affected by the changing climate conditions as well as enhance the city government’s understanding as to why these sectors are likely to be highly vulnerable.

“There are seven environmental issues in Balikpapan city: floods, limited water resources, coastal area degradations, mangrove damages, landslides, decreased river water, and poor air quality,” as shared by Mr. Suryanto, Head of Balikpapan’s Environmental Agency. He also mentioned their city’s concerns on the national government’s plan to move the national capital city from Jakarta, on the island of Java, to the province of East Kalimantan on the island of Kalimantan. As a neighboring city, they are concerned about how this action will impact their city’s spatial planning, especially since Balikpapan has committed to keeping 52% of the total land area as natural reserves and that only 48% of the land can be developed.

With the guideline provided by the Ministry of Environment and Forestry Regulation (MoEF) number 7 of 2018 as reference, the Government of Balikpapan city agreed that landslides, strong winds, floods, extreme weather, forest, and land fires, sea level rise will be assessed as climate events affecting mangrove ecosystems, food security, water availability, health, fishery, transportation as well as the economy. The baseline scenario will be set by 2020 then 2030 and 2050 respectively as the time slice and projection years. Thus, it is in line with the timeline in Indonesia’s Nationally Determined Contribution and MoEF Regulation No. 7 of 2018.

ICLEI SEAS and Balikpapan city will register this activity under the National Registry System as a form of contribution in efforts to increase national resilience and keep the global average temperature well below 2oC.