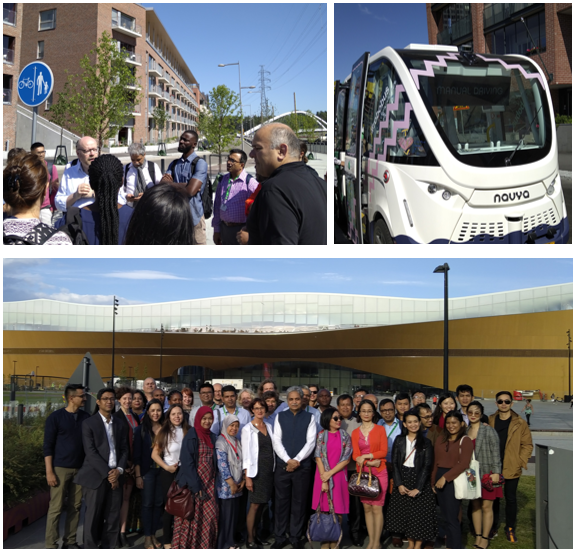 Peer learning is a core component in the Urban-LEDS II project. 28 representatives from 24 Urban-LEDS II cities from 16 countries enjoyed an intense European Study Tour in June 2019. The ambitious 8-day programme included visits to Helsinki (Finland), Bologna (Italy) and Warsaw (Poland) – all leaders in climate action. It brought together Urban-LEDS cities, supported by staff from ICLEI and UN-Habitat, helping to not only learn from relevant activities but also to foster peer exchange and build climate partnerships in countries around the globe.

The three host cities provided for an encompassing mix with each of them having developed their best practices and approaches to integrated climate action based on a set of different pre-conditions as well as social and geographical challenges. Representatives from project cities from the three countries of the Ambitious Cities Promises (ACP) also participated in the spirit of synergies between Urban-LEDS II and ACP project.

Starting in Helsinki, one of Europe’s most ambitious cities aiming for carbon neutrality by 2035, the finish host city introduced its peers from across the world to the city’s “Climate-Smart Helsinki” action plan. In embracing smart and innovative solutions and a mix of public and public-private initiatives, Helsinki is set to address the expected rise of flooding and heat waves, as well as emissions from heating, the city’s largest single source of emissions.

The former harbour area of Kalasatama now becoming a new residential neighbourhood and a living lab for climate adaptation and low-emission solutions across sectors thereby provided for a tangible example of Helsinki’s strategy to participants.

During their second stop in Bologna, participants focused on the benefits of active involvement and integration of citizens and the role of culture in the development and implementation of local sustainability action plans and strategies. Looking back on not only a longstanding cuisine and food production tradition in the region, the city is tasked with transforming a large historic and privately owned building stock. As a result, Bologna has developed a set of practices and approaches to incentivise its citizens and businesses to become responsible stakeholders and decision-makers in the socially and environmentally sustainable development of their quarters, homes and production chains.

For the City of Bologna, its most valuable to establish dialogue and partnerships and to share experience between cities across the world to mutually strengthen our actions and promote resilient and low emission development

Managing the largest district heating network in Europe, while looking back on a long history of coal dependence, Warsaw had valuable lessons at hand for transforming energy markets and embedding sustainability in their urban planning processes. With a visit to Warsaw’s largest wastewater treatment plant covering the demand of over 2 million inhabitants, UrbanLEDS cities discussed waste-to-energy solutions and synergies between waste management and the operation of energy efficient thermal district networks.

The three selected host cities not only shared their most replicable and front running examples and approaches with their peers from 18 different countries to promote integrated climate actions and emission reduction across sectors, but also the different challenges and climate change-induced risks they are each faced with.

In coming together for a journey through some of Europe’s most ambitious and experienced cities, UrbanLEDS cities not only set the scene for their participation in the Resilient Cities 2019 conference in Bonn (26-28 June 2019), but also fostered their cooperation and ambitions. The direct exchange with peers from across the world and across sectors not only left UrbanLEDS cities with new ideas and inspiration, but with strengthened partnerships and cooperation opportunities for the development of their low-emission development and adaptation strategies.