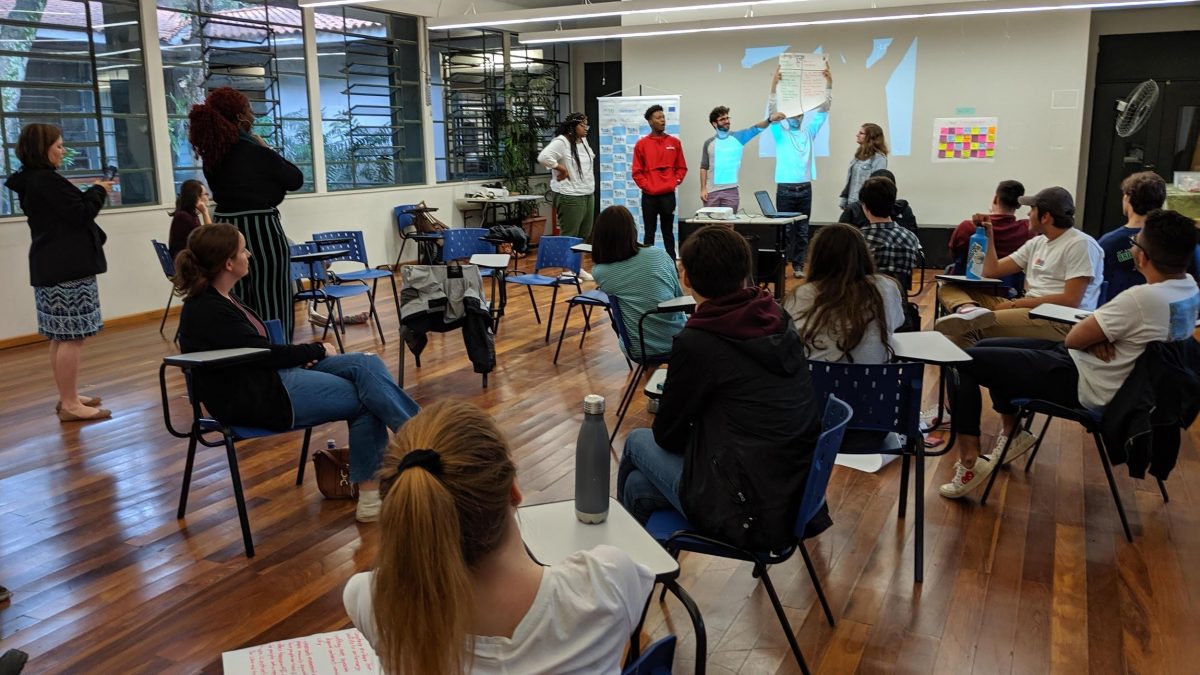 To ensure that young people have their voice heard in the Local Climate Action Plans of the Brazilian cities of Recife (PE) and Fortaleza (CE), the ‘Youth Workshop – Construction of the Local Climate Action Plan’, promoted by ICLEI South America, through Urban-LEDS II, mobilized participants from 15 to 30 years old to discuss the main topics of the climate action plan in their respective cities. One of the aims of the workshop is to make low-emission development strategies a fundamental part of policy and urban planning in cities.

The virtual meetings, held with representatives from Recife (August 20th) and from Fortaleza (August 27th) to sensitize youth resulted in proposals focused on

“As those who will experience a greater degree of climate change impacts and all other threats related to sustainability, the youth cannot be ignored. ICLEI understands this challenge and since 2017 has been actively working to train and include young people in many decision-making processes, and, in building and implementing solutions to respond to the challenges of sustainable urban development in cities and local governments associated with its network.” says Armelle Cibaka, consultant for the Leaders of the Future of ICLEI South America.

Youth involvement in government activities and projects ensures that new relationships between individuals, institutions and the ecosystem do not threaten the right of future generations to meet their own demands and needs for a better quality of life. The performance of young people is of such importance, that in response to the recommendation of the World Conference of Ministers Responsible for Youth in 1998, August 12th was declared as International Youth Day by the UN General Assembly in 1999.

Leta Vieira, representative of Recife’s city hall, considered this moment of exchange as the most striking of the entire process of building the Local Climate Action Plan. “It is with an active and enlightened youth that we will build an inclusive and environmentally balanced Recife that is also carbon neutral and resilient to climate change.”

Cássia Cavalcante, from the Sustainability and Climate Change Cell in Fortaleza, said that the workshop was a favorable moment for the local youth to be able to enter into the decision making space. “Furthermore, engaging young people in political processes that involve setting a climate agenda must always be a priority, providing an incentive for them to occupy strategic spaces with creative ideas.”

“Create spaces to strengthen guidelines specifically aimed at the popular participation of youth, it is urgent,” noted Symone Falcão, 27, a member of the Youth Environment Collective of Recife. “We are open to enhance our capacity to support the city’s climate management through youth leadership.”

In her opinion, community articulation for shared information is fundamental in climate action, but the support of local management and different sectors is necessary for this to happen. “After all, the most vulnerable to the effects of climate change are also those who are socially vulnerable, resisting and creating survival mechanisms. Therefore, climate action needs to promote social and environmental justice in the city of Recife,” concluded Falcão.

“The main audience that can really see climate change with it´s necessary urgency is youth. Young people can understand that the action must be local, both individually and collectively, and without any delay! So listening to them in the Local Plan process of Climate Action in cities is essential” comments Camila Chabar, ICLEI South America Climate Change coordinator.

Since 2017 the ‘Leaders of the Future’ line of action has been developing activities for the training, awareness and inclusion of youth in the sustainability agenda. All the participants of this webinar have also been registered in ICLEI’s database and will be invited to participate in other activities such as volunteering with the local governments or in academic research. In addition, the workshop has also opened a line of direct communication between local governments and youth so that local governments are able to directly reach out to youth in future decision making and implementation processes.