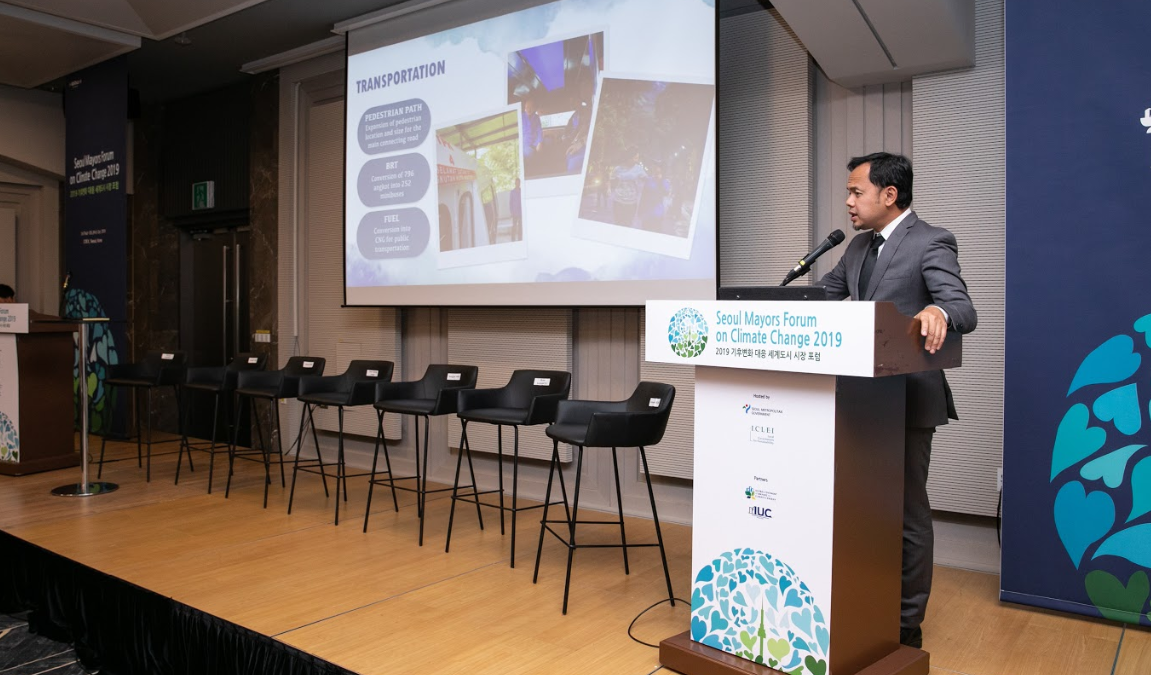 Cities across the globe continue to inspire each other with their local climate and energy action. Bogor, a rapidly growing city in Indonesia, shares its experiences in implementing low-emission development during the Seoul Mayors Forum on Climate Change (SMFCC) 2019 held last 23-24 October.

In one of the parallel sessions during SMFCC, Mayor Bima Arya talked about Bogor City’s three-pronged identity as a smart, green, and heritage city in Indonesia. As a model city of the Urban-LEDS II project and a committed city under the Global Covenant for Climate and Energy (GCoM), Bogor continuously works with ICLEI – Local Governments for Sustainability in implementing local urban low emission development strategies. The Urban-LEDS II is an international project implemented by ICLEI and UN-Habitat and funded by the European Commission.
During his presentation, Mayor Bima emphasized the need for accelerated climate action at the local level not only to support international agreements and national commitments but because this also translates to a better quality of life for people in the city. He also shared that Bogor potentially aims to reduce 29-33% of its greenhouse gas (GHG) emissions by 2030 relative to their 2010 level.

Some of Bogor’s initiatives include expansion of the pedestrian path to promote walking and ecomobility as well as the use of compressed natural gas (CNG) in its public transportation. Bogor boasts of its public open space owing to the presence of a botanical garden within the heart of the city. Mayor Bima also strongly advocates for energy efficiency especially in the operation of government-owned
buildings and facilities. Recognizing that the city cannot operate in silo, Bogor has forged partnerships with neighboring localities such as Bogor Regency and DKI Jakarta for various urban development programs and projects.

Ms. Amanda Eichel, GCoM Director shared the overall objectives of the GCoM highlighting that GCoM is the largest global alliance for city climate leadership, built upon the commitment of over 10,000 cities and local governments.

GCoM-committed cities share a long-term vision of supporting voluntary action
to combat climate change and work towards a resilient and low-emission society. The session marked a new beginning of GCoM in Korea as members of the global and national secretariat as well as selected Korean cities convene to discuss innovative solutions for tackling climate change and energy.

Held under the theme of “Local climate action in the post-2020 climate change regime,” the 3rd SMFCC aims to provide a platform for mayors around the world to discuss urban roles in the new regime. The SMFCC showcases how local governments are already taking the leading roles to limit global warming to 1.5°C to deliver on the commitment of the Paris Agreement.