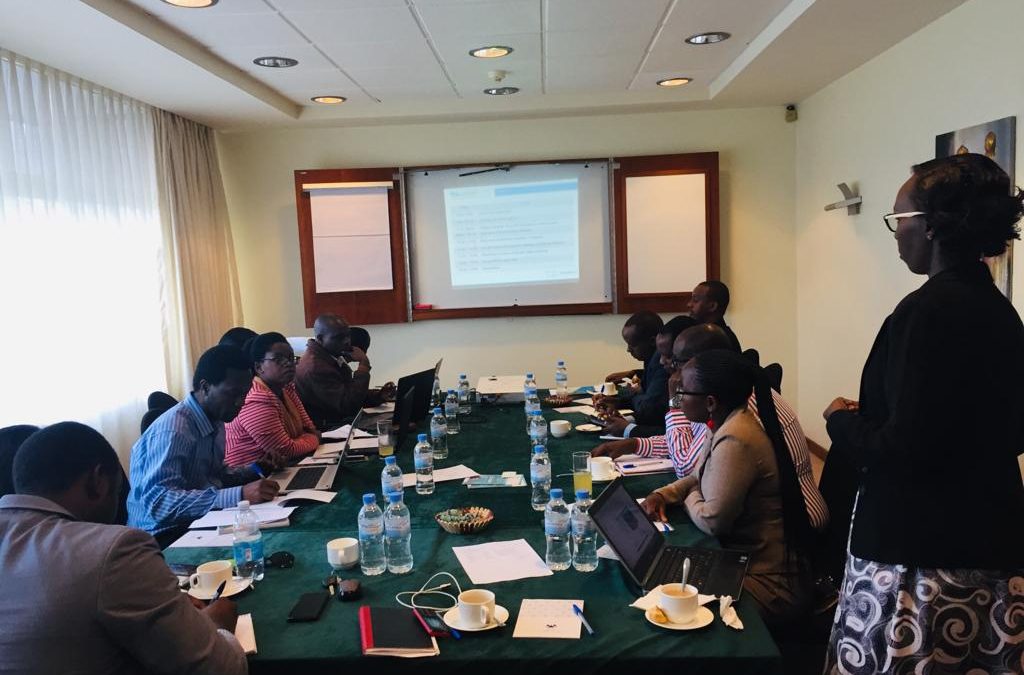 The 3rd Rwanda Urban-LEDS II project National Advisory Group (NPAG) meeting was held on 10 October 2019 at Hotel des Mille Collines in Kigali. Chaired by Edward Kyazze from Rwanda Ministry of Infrastructure (MININFRA) and co-chaired by Jean Pierre Munyashyaka from The Global Green Growth Institute (GGGI), the meeting updated the NPAG on project implementation progress and alignment with other projects in Rwanda.

Stakeholders from national government, ministries and organisations, all of which advise and guide the implementation of Urban- LEDS II in Rwanda, attended the meeting. They include representatives of The City of Kigali, the District of Rubavu, and the District of Muhanga, as well as representatives from all NPAGs, namely MININFRA, GGGI, Rwanda Environment Management Authority (REMA), NDC Partnership, Rwanda Land Management and Use Authority (RLMUA), Local Administrative Entities Development Agency (LODA), The Ministry of Local Government Rwanda (MINALOC), The Rwandan Association of Local Government Authorities (RALGA), Delegation of the European Union to Rwanda, The Ministry in charge of Emergency Management (MINEMA) and Rwanda Housing Authority (RHA).

1. Stakeholder and institutional set up

The NPAG discussed progress on the implementation of the project and gave an update on the activities that have taken place. Since the inception of the project in Rwanda in 2018, the Urban-LEDS II team has successfully identified and established contact with the relevant stakeholders that are pivotal for the implementation of the project, from district to national level. The team, with approval from the Mayors at the three districts, have identified project focal points that assist with communication and co-ordination of activities at district level.

One of the main objectives of the project is to mainstream and operationalise local climate action through capacity building. The team gave feedback on the capacity building activities at district level, such as the training workshops on mitigation and adaptation. These workshops aimed at building capacity of the district officials in order to compile the Green House Gas Inventories (GHGI) and Climate Risk and Vulnerability Assessments in each district. These are key documents in formulating the Low Emission Development strategies (LEDs) for each district.  A key learning from these workshops is the understanding gained on how district officials can continuously work with communities to address their vulnerabilities and improve their adaptive capacity. Another learning was around understanding how data collection for key sectors for the GHGI can be improved. The Urban LEDS II team is in communication with REMA about collaborating in implementation of an integrated MRV, which will enable the alignment of reporting and monitoring of climate action.

The City of Kigali and Muhanga District, along with 21 other Urban-LEDS ll project cities, participated at the South North learning exchange in June 2019. Over eight days of site visits, the host cities of Bologna, Helsinki and Warsaw showcased projects and strategies on low emissions development. Areas of interest that were identified by the Rwandan cities include urban mobility, wastewater management, public spaces and energy efficiency in buildings. Following the exchange, the project cities participated at the ICLEI 2019 Resilient Cities Conference held in Bonn, Germany. The Rubavu district presented on the role of the district in facilitating local energy access initiatives.

Guidance on the implementation of the project included a discussion on the concept notes on the demonstration projects. The district officials presented on their ideas for the demonstration projects. Both the City of Kigali and Muhanga identified retrofitting healthcare centres with energy efficiency fixtures and rainwater harvesting equipment. The Rubavu district proposed upgrading the public open space and retrofitting existing public lighting with solar lights along the beach at Lake Kivu.