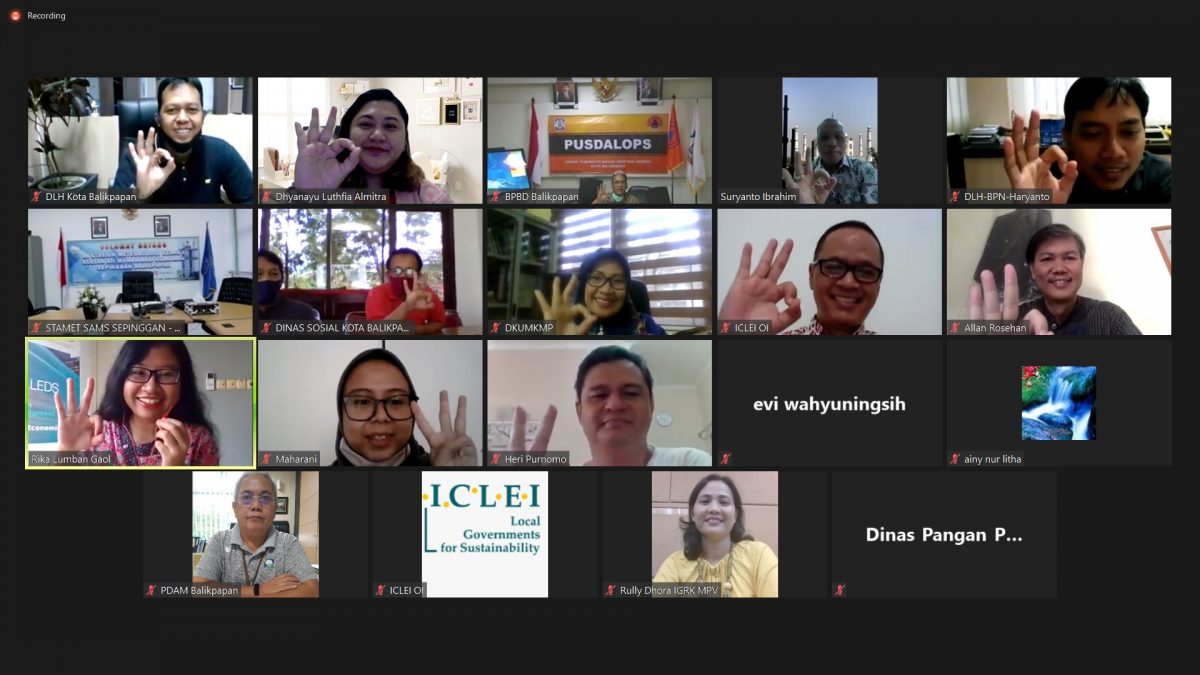 ICLEI Indonesia supported the conduct of GHG emissions inventory to strengthen the development of low emission urban development strategies of Urban-LEDS II model cities, Balikpapan and Bogor. Following the completion of the GHG inventories, validation workshops were conducted to address remaining data gaps as well as to scope approaches to address challenges in data gathering and to prioritize emission reduction strategies into their local development planning.

Jakarta, Indonesia – Greenhouse Gas (GHG) Emissions Inventory Validation Workshops were conducted virtually for the City Governments of Balikpapan and Bogor and Balikpapan last 26 June and 29 June, respectively which aims to verify the initial findings of the GHG Emissions Inventory reports. Both cities have reported the same top three sectors with the highest contribution to GHG emissions, namely: stationary energy; transportation; and waste. The inventory reports used both the SIGN SMART reporting framework for provincial and national reporting of emissions and the GPC framework to help develop the city’s baseline emissions and establish priority mitigation actions.

In Phase I of the Urban-LEDS project, Balikpapan City was assisted to include a Low Emissions Development Strategy (LEDS) into their City’s 5-Year Development Plan (RPJMD). Currently, the Urban-LEDS II will be providing technical assistance in updating their RPJMD for the period of 2021 to 2026. This updated plan will take into consideration the adaptation co-benefits of mitigation actions while also taking into consideration the climate risks and vulnerabilities of the city.

Mr. Suryanto Ibrahim, Head of Environmental Agency stated that “it is important to know how much emissions have been achieved from this activity and what the public and private parties can do […] it is hoped that GHG becomes a massive movement at the community level.”

The project shall also look into addressing challenges in data collection at the local level. Mrs. Ratnasari, on behalf of the Ministry of Environment and Forestry (MOEF), said that “the improvement of data will always be needed. Starting from what we need, then this will determine what kind of capacity building is needed, to further support improvement/process improvement. And a good mapping of service / Institutional arrangements is very important for validation”.

Concerning the limited available data, the City Government of Bogor hopes that the MoEF can support the local governments in coordinating with relevant state business entities to contribute relevant data towards GHG emissions and help address the data shortages.

The Bogor City Development Planning Agency acknowledges the importance of harmonized GHG Emissions Inventories among cities, as Mr. Naufal stated “Regional synchronization is really important to handle provincial and regional mismatches. Because surely other regencies/cities are experiencing the same thing”. The City Government of Bogor pays great attention in every process of preparing the City GHG inventory document, considering the high flexibility of conditions for example in the form of rotation staff and in the framework of sustaining the climate change reporting.

Rully Dhora Sirait, on behalf of MoEF, expressed her appreciation of the Urban-LEDS II activities. She also stated that the Bogor City mitigation actions have been carried out and reported into the National Registry System. The national government is aware of this and adopted a national-level data approach for energy and industry data. Regarding the difference between SIGN-SMART and GPC output, KLHK will try to discuss the GPC method in the formal panel event, since the SIGN-SMART method that has been synchronized with the Budget Performance Planning and Information Collaboration (KRISNA) and supports Low Carbon Development initiative at the national-level.