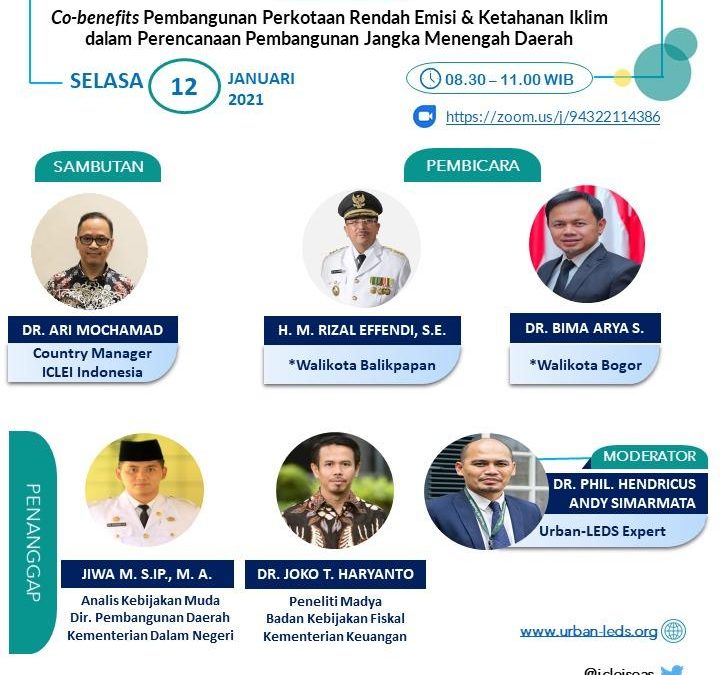 Through a virtual seminar hosted by ICLEI Indonesia Office, Urban-LEDS II model cities, Balikpapan and Bogor, pitched the final draft of their Climate Action Plans (CAP) to the National Advisory Group (NAG) and other city governments.

How the Urban-LEDS II CAPs are formulated

The cities of Balikpapan and Bogor, supported by ICLEI and the contracted consultant, formulated the final draft of CAP by adopting ICLEI’s Green Climate Cities Methodology. The team has used a climate change co-benefit approach to formulate the CAPs. Co-benefit is an approach to integrate climate change adaptation and mitigation actions into joint activities that also consider other development agendas for the benefit of the wider community in a transformative, effective and efficient manner. Ultimately, the proposed CAPs drive the city’s low emission development by reducing GHG emissions from the top three contributing sectors, namely energy (including transportation), waste, and agriculture, forestry, and other land use (AFOLU). As part of a holistic low emission development in the partner cities, the proposed CAPs shall also enhance their climate resilience and achievement of the SDGs.

Both model cities plan to embed the Urban-LEDS II CAP into their respective city development plans. Vice Mayor of Bogor City, Dedie Rachim, stated that light-rail transit and tram transportation projects are being reviewed to address the city congestion, mobilize private-to-public transportation movement, and improve urban air quality. Vice Mayor Rachim is eyeing the development of 58 hectare in the West Bogor area into the city’s second botanical garden  as a means to sequester carbon and protect urban biodiversity.

Tommy Alfianto, Acting Head of the Environmental Agency of Balikpapan City, said that the city will remain committed to be free of coal mine areas, safeguarding 52% of the total land area as natural reserves in the next five years. Furthermore, he added that the city will mobilize greater community actions through Kampung Iklim (Climate Village), a program of adaptation and mitigation actions at the community level developed by the Ministry of Environment and Forestry. According to Alfianto, other means to lead Balikpapan City toward resilience include optimizing methane-capture (manure and landfill) facilities, harvesting rainwater, and expanding mangrove forest sites.

Outlook from the national government

On behalf of the Ministry of Home Affairs, Mr. Jiwa Muhammad, Youth Policy Analyst, shared the perspectives of the national government on sustainable development. He affirmed that the climate change interventions should harmonize the programs and activities contained in the Ministry of Home Affairs’ Regulation No. 90 of 2019 on Development Planning Classification, Codification, and Nomenclature for tracking, reporting, and monitoring. In addition, Mr. Muhammad stated that “low emission urban development is not only the task of the government but of the whole of society including the public and the private sector.”

In the context of financing climate projects, Mr. Joko Tri Haryanto, Senior Researcher in the Fiscal Policy Agency of the Ministry of Finance, strongly emphasized that climate funding should be cross-sectoral cost. Additionally, he suggested the national indicators, such as the Environmental Quality Index, need to be considered as part of the key performance indicators of CAPs.

At this moment, Balikpapan City is taking into account the Urban-LEDS II CAP as a reference in the process of finalizing the 2021-2025 final draft of city mid-term development planning/RPJMD. On the other hand, Bogor City is revising the 2019-2024 RPJMD t by embedding the Urban-LEDS II CAP.