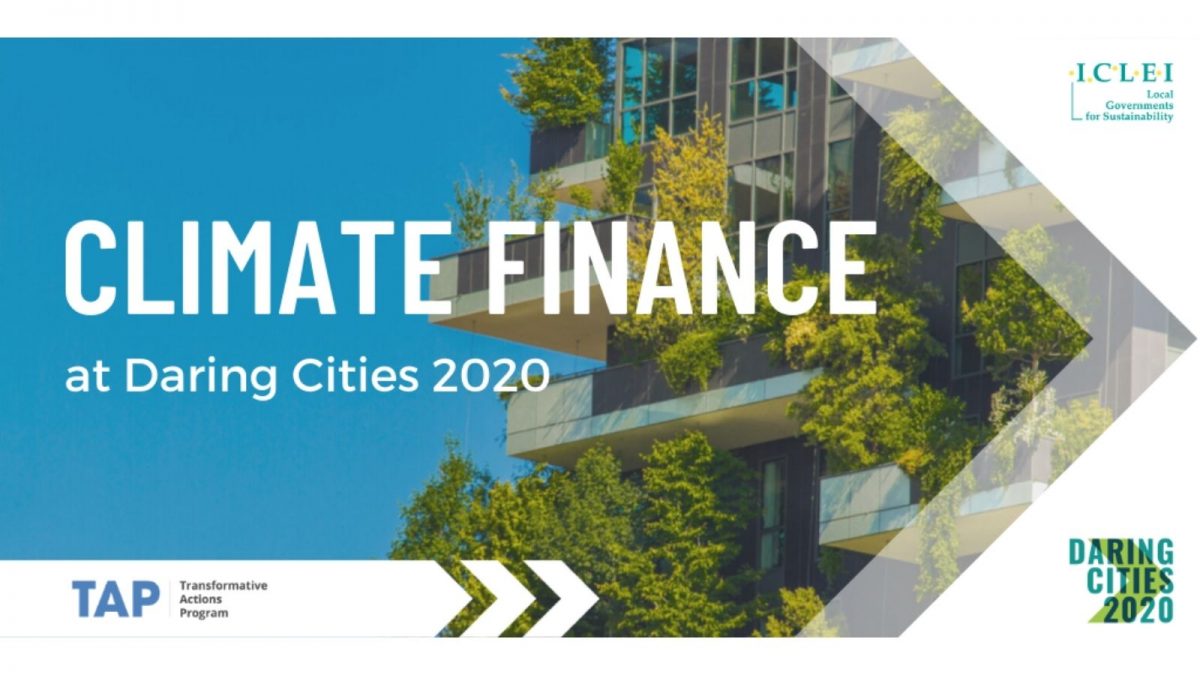 Despite the challenges that followed the spread of COVID-19 as a global pandemic, the Urban LEDS II project has made substantial progress and has led crucial engagements with local and regional governments  throughout 2020. Though face-to-face meetings were not feasible in the past year of the project, Urban LEDS cities have kept up the momentum and continued the dialogue on relevant topics and issues with the prospects to analyse, act and accelerate their local climate action. This article highlights key conversations that are implicit of the growing ambition and local impact of the program.

Held every three years, the conference provides a multi-level interface between the European Union and sustainability action at local level. In 2020 the event was hosted online in collaboration between ICLEI and the City of Mannheim.

The Urban-LEDS II project and ICLEI Europe brought together representatives from regional and local governments on October 2nd at the Mannheim2020 conference to debate the meaning of highly publicised commitments by local governments to take climate action. The session titled ‘Beyond Climate Emergency: From ambition to action’ consisted of a round of pitches of exemplary local sustainability projects, which were also showcased as good case examples to engender peer learning. The examples ranged from sustainable mobility (low-emission bus fleet in Warsaw), urban resilience (LIFE-IP Urban Klima 2050 strategy of the Basque Country), platform for co-creating new green products and services (Green Hub Denmark), and climate change adaptation in seaside cities (Safe Harbour Cork). Panellists agreed that although there is no one size fits all solution, there is significant potential of benefitting from experiences and solutions implemented in towns with similar challenges.

Hosted by ICLEI World Secretariat and the Federal City of Bonn, Daring Cities 2020 presented a new virtual experience of a global forum on climate change for urban leaders tackling the climate emergency, especially in the context of the Covid-19 pandemic. The 3-week forum offered an array of high level and visionary speaking sessions, a series of informative workshops, resources like an email bootcamp and podcast series, and networking opportunities. The forum also accommodated different topics, time zones and languages and set the course to COP26 and beyond.

On October 19th, ICLEI Europe and UN-Habitat organized an Urban-LEDS session titled ‘Fair and Sustainable Energy for All with Integrated Low Emission Development Planning’  in synergy with the Urban Pathways project.  The discussion on integrated and sustainable planning was further deepened with the participants split into two groups – one focused on transport and energy planning and the second on waste management and energy. The focus on regulation and governance, lack of mandates to push for sustainable planning and the importance of co-benefits while considering the synergies between energy planning and transport, were the main topics highlighted in the conclusion of the event. The event also promoted a city-to-city exchange among city participants.

On October 27th, a jury of financial experts provided guidance to 8 preselected TAP (Transformative Actions Program) and Urban-LEDS project proposals at ‘Test your Pitch’, a climate finance session. This session aimed at addressing technical challenges of local governments to access climate finance by enhancing their capacities and limited knowledge about the requirements of potential funders.  In this pitching session funders and project developers met, discussed and tested ideas. Participants presented their pitches and received recommendations from the group and a jury consisting of financial partner/institution representatives. This facilitated process allowed the sharing of both implicit and explicit knowledge, which is essential for improved project preparation, bankability and access to finance.

The objective of the Local Climate Solutions for Africa (LoCS4Africa) congress series is to strengthen cooperation that will lead to significant climate action. The 2020 theme for LoCS4Africa Congress – Financing for Change – aimed at responding to the growing acknowledgement that to tackle climate change, city-scale finance must be mobilized. The congress as a whole was co-hosted by ICLEI Africa, the City of Kigali and the Rwandan Convention Bureau.

Along the margins of this LoCS4Africa 2020 congress, the South African and Rwandan National Project Advisory Groups (NPAGs) of the Urban-LEDS II project met under the project’s  Regional Exchange offering. The ICLEI Africa team from each country described how Urban-LEDS II has been implemented in both South Africa and Rwanda, highlighting key achievements and findings. This was then contextualised in the national perspective when representatives from South Africa’s Department of Environment Forestry and Fisheries and the Rwandan Environmental Management Authority presented on their respective climate change commitments, their Nationally Determined Contributions, and the roles of cities. Participants then further broke out into smaller groups for in-depth discussions around how climate action plays out at the local level, and heard from Urban-LEDS II cities and partners about their experiences implementing climate projects.

Some insights from these discussions included that institutional structures can be enhanced to mobilise increased funds, and that guidance on climate action is often required from national decision-making. LoCS4Africa presented several opportunities to arrange a number of Urban-LEDS II training and engagements, in particular training on climate finance and the Transformative Actions Programme (TAP) facility. The training unpacked the different types of mechanisms available to finance climate projects and what a good climate project looks like, unpacked what climate finance is and how it flows to the beneficiaries, with the focus specifically being for subnational governments. The sessions also unpacked the different barriers and opportunities that cities and subnational governments have to access climate finance.

Although much of the world’s attention has been on COVID-19 in 2020, the climate challenge cannot be sidelined. The urgent necessity for local climate action still prevails if not heightened. Urban-LEDS is proud to have kept up the momentum and supported project cities and beyond in contextualizing their efforts and continuing the dialogue through these innovative events through 2020. In 2021, the Urban-LEDS II project is expected to come to an official close making the remaining time crucial to draw meaningful conclusions and chalk out strategies to keep up the momentum. The much anticipated Urban-LEDS Regional Exchange event with all stakeholders, including partners and cities, will occur before the official close of the project. Watch the space for more details to be shared shortly about this upcoming event.