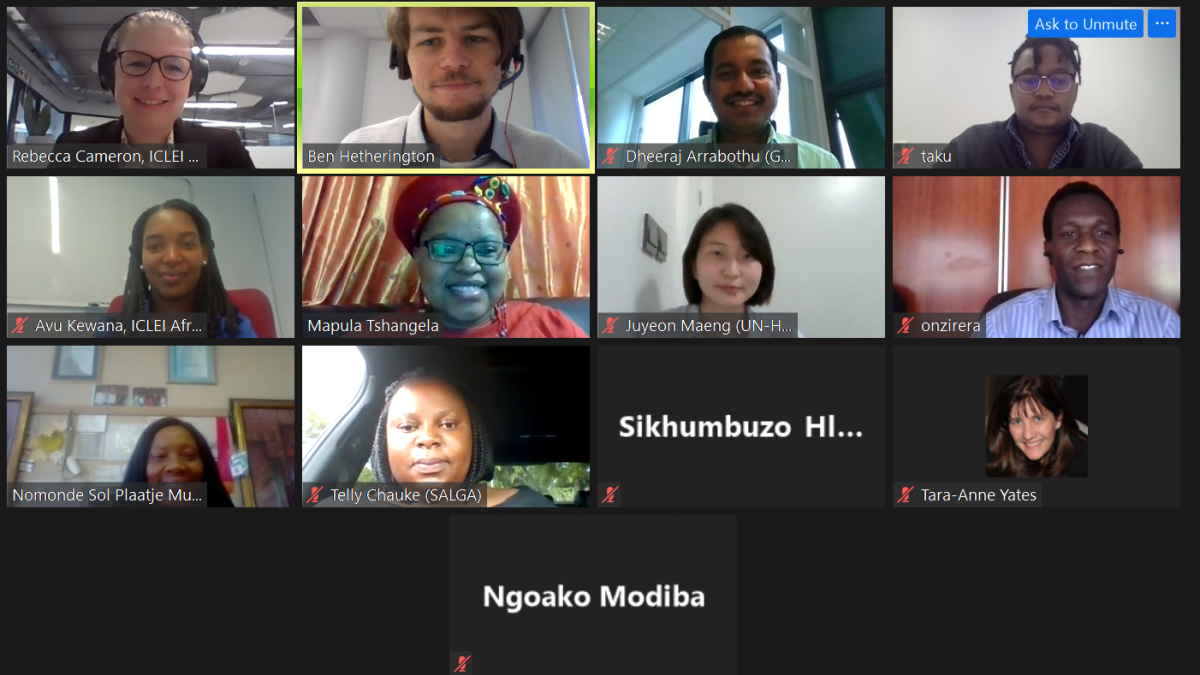 Faced with the logistical constraints which the COVID-19 crisis has brought about in 2020, but acknowledging that the need to build back stronger and more sustainably cannot be deferred, the project leads and stakeholders of the Urban-LEDS II project in Rwanda and South Africa rose to the challenge of meeting key outputs through concerted remote engagement

The Urban-LEDS II team held its first online engagement with the Rwandan National Project Advisory Group (NPAG) in June and has since met twice thereafter. The meetings have been used to provide updates on project deliverables, including the status, progress and next steps for the pilot demonstration projects; and the findings of the greenhouse gas inventories, climate risk and vulnerability assessments, and baseline assessment reports which were compiled for each district under the Urban-LEDS II project.

Representatives have included district focal points, officials from the Rwandan Environmental Management Authority (REMA), Ministry of Environment (MoE), and the Rwandan Local Governments Authority (RALGA) respectively, as well as stakeholders from Ministry of Infrastructure (MININFRA) and the Global Green Growth Institute (GGGI) acting as chairs for the meetings. Noting both the viability of having online engagements, and the potential for deep learning on greenhouse gas inventories, risk and vulnerability assessments, and climate finance, online training sessions for all three topics were soon scheduled.

Over the course of four afternoon sessions from July to October, the Urban-LEDS II team hosted training on the greenhouse gas emissions inventories and climate risk and vulnerability assessments (CRVA) compiled for the model cities of Muhanga, Rubavu and Kigali. An innovative highlight was the use of the Miro board application in the second CRVA training to simulate an in-person participatory workshop environment. Of these sessions, the greenhouse gas emissions inventories sessions were hosted for the all 7 of the South African Urban-LEDS cities, with future plans for training on Climate Risk and Vulnerability Assessments planned for early 2021. The purpose was to provide members of the National Project Advisory Group (NPAG), as well as district officials, with a comprehensive grounding in the technical aspects involved in compiling both documents to ensure replicability in future years.

In South Africa, a similar approach to Rwanda was followed. Remote engagements proved to provide a successful approach to ensure communication amongst the multiple Urban-LEDS cities, the project team, National Project Advisory Group (NPAG) members and any appointed Service Providers for on the implementation of the project.

In September, the Urban-LEDS project team together with the model cities, KwaDukuza and Steve Tshwete Local Municipalities, as well as the NPAG members, which included officials from national governments such as the Department of Environment, Forestry and Fisheries (DEFF), Cooperative Governance and Traditional Affairs (COGTA) and stakeholders from the South African Local Government Association (SALGA), EU delegation of South Africa and the Development Bank of Southern Africa hosted the first virtual NPAG meeting, which guaranteed the attendance of all officials and stakeholders.

The practicality of knowing that South African sub-national and national officials are able and willing to timeously participate in remote engagements opened doors for the Urban-LEDS ll team to become innovative, and as a result, a Programme Steering Committee (PSC) for the implementation of the building and streetlight metering pilot programme in seven South African municipalities was formed. The PSC serves as a platform where the pilot project recipients are able to (i) Share knowledge and experience; (ii) Provide input and steer over city related project implementation; (iii) Raise issues and ideas to do with project implementation; and; (iv) Identify synergies with other work happening in the municipalities to increase impact of the identified pilot programme. Without remote engagements, forming such a platform wouldn’t have been possible in the current circumstances.

The culmination of these online approaches, refined iteratively each time, was the meeting of the two NPAG’s under the Urban-LEDS II Regional Exchange. In fact, the forum under which this exchange was held, the Local Climate Solutions for Africa (LoCS4Africa) Congress, was a 2-week long example of creatively bringing together some of the most exciting thinkers and actors in climate finance on the African continent. LoCS4Africa presented several opportunities to arrange a number of Urban-LEDS II trainings and engagements, in particular the training on climate finance and the Transformative Actions Programme (TAP) facility. The need, importance and approaches to accessing this finance were extensively discussed by both Rebecca Cameron and Eszter Mogyorosy from ICLEI Africa and ICLEI World Secretariat respectively. The training unpacked the different types of mechanisms available to finance climate projects and what a good climate project looks like, unpacked what climate finance is and how it flows to the beneficiaries, with the focus specifically being for subnational governments. The sessions also unpacked the different barriers and opportunities that cities and subnational governments have to access climate finance.

Because the congress as a whole was co-hosted by ICLEI Africa, the City of Kigali and the Rwandan Convention Bureau, it offered an auspicious platform on which to hold a regional exchange of both South African and Rwandan NPAGs. The meeting began with a virtual introduction of everyone in the room, after which the ICLEI Africa team from each country described how Urban-LEDS II has been implemented in both South Africa and Rwanda, highlighting key achievements and findings. This was then contextualised in the national perspective when representatives from South Africa’s Department of Environment Forestry and Fisheries and the Rwandan Environmental Management Authority presented on their respective climate change commitments, their Nationally Determined Contributions, and the roles of cities.

Following this, participants broke out into smaller groups for in-depth discussions around how climate action plays out at the local level, and heard from Urban-LEDS II cities and partners about their experiences implementing climate projects. Some insights from these discussions included that institutional structures can be enhanced to mobilise increased funds, and that guidance on climate action is often required from national decision-making.

Following a video on the insights around climate finance, the discussion was opened to everyone for a conversation on how climate finance has been explored in both the Rwandan and South African contexts, before reflections on the exchange as a whole from the Rwandan Association of Local Government Authorities (RALGA). These conversations allowed for insights on innovative finance mechanisms and the effective partnerships which have leveraged funding in both countries.

Despite covering extensive ground during this 2.5 hour meeting, both NPAG’s felt encouraged to join future exchanges for continued sharing of key insights and learnings to scale knowledge before the project ends.

Indeed, with over six months’ experience of consistently improving virtual engagement, the potential for sustained collaboration, knowledge-sharing and mutual learning is considerable for the Urban-LEDS II project and its partners despite the remote working obstacles which came about in 2020.