Forging ahead towards an inclusive, safe, resilient and sustainable future 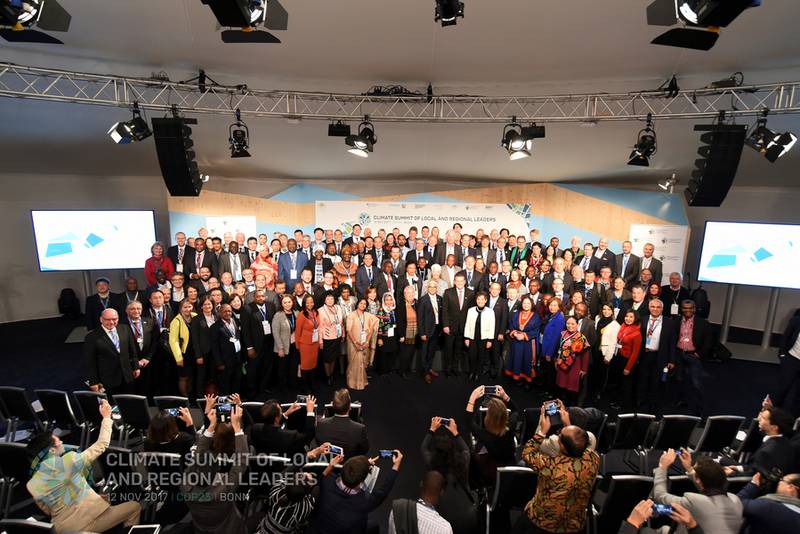 The Global Covenant of Mayors for Climate & Energy – a featured partner of the Climate Summit of Local and Regional Leaders, which brought together over 1,000 delegates and over 300 political leaders at COP23 – made two major announcements here at the 23rd United Nations Climate Change Conference in Bonn.

The Global Covenant of Mayors – or GCoM – has announced that committed cities could collectively reduce 1.3 gigatons of CO2 equivalent (GtCO2e) per year from business as usual in 2030, achieving a cumulative total of 15.64 GtCO2e between the years 2010 and 2030. This data was released as part of the first data aggregation report released since the Compact of Mayors and the European Covenant of Mayors merged, demonstrating the collective greenhouse gas emissions reduction potential of nearly 7,500 cities committed to the Global Covenant of Mayors. At COP23, the Global Covenant of Mayors also released a new data reporting standard, which provides a common framework for reporting local community greenhouse gas emissions as part of commitments that cities and local and governments are making through the GCoM. The framework is designed to be consistent with national government reporting requirements and UNFCCC – the United Nations Framework Convention on Climate Change – and adjustable to local conditions. Tracking this data and making it readily available is an important step in assessing progress on the Paris Climate Agreement.

Spread the word about your commitment.

Report and update your targets, action plans and actions and greenhouse gas inventories. Three platforms are available, including the carbonnClimate Registry where cities and towns from 86 countries are already reporting.

Learn more about the Global Covenant of Mayors.

Review the frequently asked questions on the GCoM and Compact of Mayors.

Take a look at the announcement and frequently asked questions on the new City Data Standard.