Synergies between Urban-LEDS II and CoM SSA in a snapshot 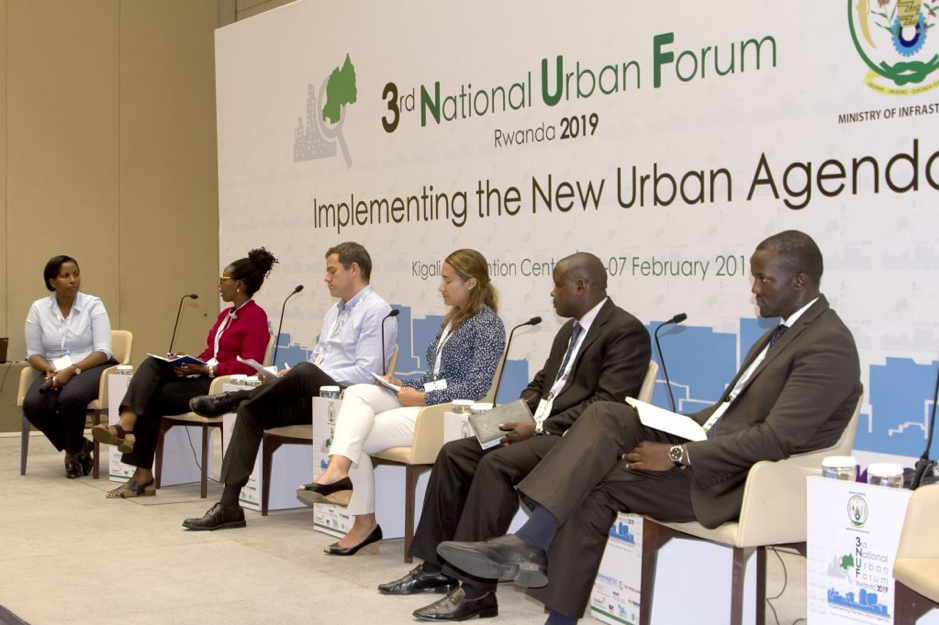 After two successful National Urban Forums (NUFs), the Third National Urban Forum (NUF3) was held on 6-7 February 2019 at Kigali Convention Center. It was lead by the Ministry of Infrastructure of Rwanda (MININFRA) and received support from different stakeholders in the urban sector, including UN-Habitat, Global Green Growth Institute, International Growth Centre, World Bank, Enabel and ICLEI Africa. The NUF3 convened 300 hundred participants from different countries and all stakeholders in the urban development sector in Rwanda. It recognised cities as the bedrock to achieving sustainable development, in alignment with global development agendas such as the Sustainable Development Goals (SDGs) for Agenda 2030, especially SDG 11 (Make cities and human settlements inclusive, safe, resilient, and sustainable) and the New Urban Agenda.

Rwanda’s population is projected to increase to 16.6m, with an urbanisation rate of 35%, by 2024. The projected density of 645 inhabitants per square kilometre will have significant impact on the already high population. Rwanda is anticipated to be hard hit by impacts of climate change such as flooding, landslides, and erosion. Therefore, failure to build adaptive capacity and resilient urban areas could lead to extreme weather events, caused and intensified by climate change, becoming catastrophic events.

The NUF is a platform to promote dialogue amongst stakeholders, whilst highlighting urban development issues at the country level, in order to provide strategic guidance on sustainable urbanization strategies, policies, and programmes in Rwanda. Further, urbanization is seen to be a multi-sectoral and multi-stakeholder process where national and local governments and other actors involved can engage in urban policy debates.

The NUF3 was organised around four themes: 1) City branding, cultural uniqueness and competitiveness for local economic development; 2) Participatory urban/spatial planning and urban data; 3) Affordable housing and unplanned settlements upgrading and 4) Urban resilience, climate change and green cities. As part of promoting a collaborative discussion on the role of local governments in climate action, the Urban-LEDS II team, including ICLEI Africa and UN Habitat, contributed to a panel discussion on urban resilience and climate change under theme 4. This was done in collaboration with key national government stakeholders such as the Ministry of Environment, Rwanda Environmental Management Authority (REMA), FONERWA, The World Bank, and Global Green Growth Institute (GGGI). Amongst the participants were The Mayor of Kigali and Vice-mayor of Rubavu District both of which are Urban-LEDS II project cities.

The session on theme 4 – Urban resilience, climate change and green cities – discussed the current situation and strategies to achieving urban resilience and access to climate and resilience finance. The panel rallied in support of mainstreaming climate change and urban resilience given its importance in ensuring sustainable urban policies in Rwanda. The main takeaway from the session was the importance of building climate resilient urban policies that also address unsustainable land practices, poor urban management, and disaster risk and vulnerability.

A key outcome of the NUF for the Urban-LEDS II project cities is mainstreaming climate change into urban planning and management. The Urban-LEDS II team will work with districts to ensure that their revised district master plans reduce the impact of development on the environment, including greenhouse gas emissions, by considering sustainable, local construction materials whilst also encouraging behavioral change of the population. More so, districts need to increase the enforcement towards the protection of natural assets, such as wetlands, so that their benefits can be accessible to all and their added contribution to carbon sequestration can be sustained. Data related to climate risks and overall adaptive capacity will be considered in district planning in order to reduce disasters and vulnerabilities.

Mainstreaming climate change in planning across all sectors improves resource security, reduces risk, prevents disasters and will enable a sustainable urban future. These benefits can be enhanced through engagement and collaboration with communities, civil society organizations and the private sector.

The Urban-LEDS team continues to build capacity in Rwanda as we journey with cities towards bankable, climate smart and climate resilient project implementation.