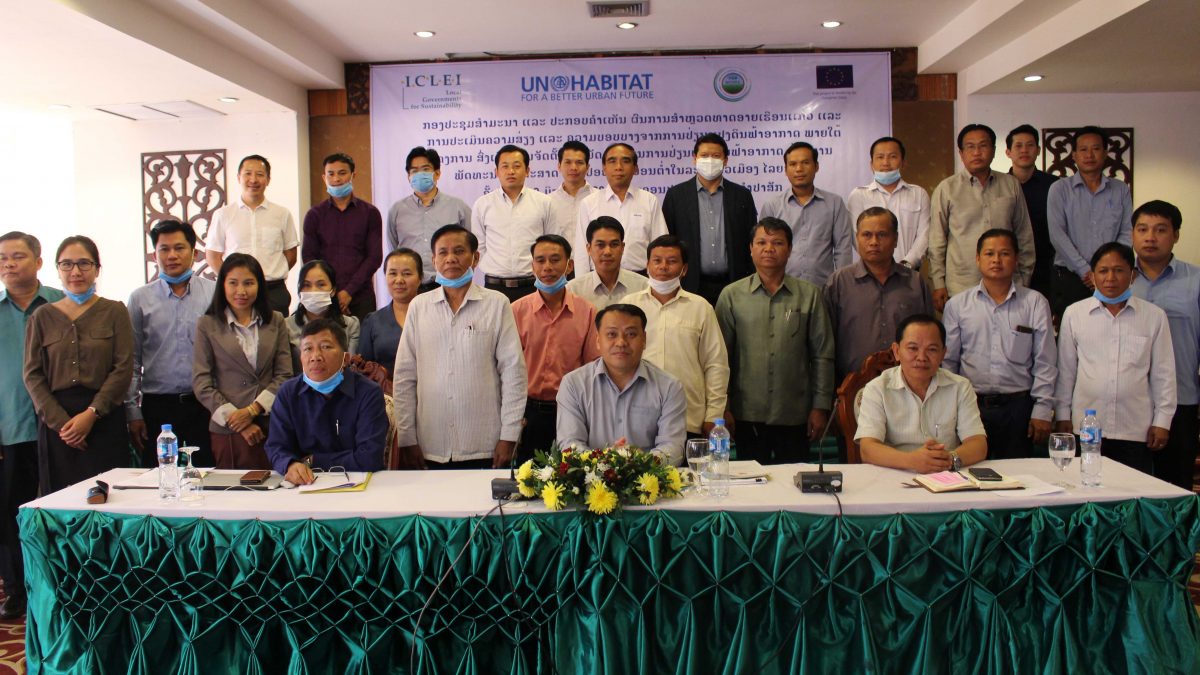 Validation workshops were conducted to verify initial findings of the GHG Emissions Inventory and the Climate Risk and Vulnerability Assessment (CRVA) reports of two model cities in Laos. Findings from these two reports are crucial in ensuring evidence-based integrated climate action planning for the cities of Pakse and Kaysone Phomivhane.

Validation Workshops to verify findings from initial reports of the Greenhouse Gas Emissions (GHG) Inventory and the Climate Risk and Vulnerability Assessment (CRVA) were conducted for the cities of Pakse and Kaysone Phomvihane at Arawan Hotel, Champasak province on 9th June 2020 and Houngthip Hotel, Savannakhet Province on 11th June 2020, respectively.

The two activities were attended by more than 60 participants, with representatives from the national government ministries, the provincial government, and the project cities. Findings from the GHG Emissions Inventory and CRVA reports shall contribute to the development of an integrated climate action plan for Pakse and Kaysone Phomvihane, addressing both adaptation and mitigation components of climate action.

The workshops provided a venue to review and validate the initial findings of the  GHG Emissions Inventory and CRVA reports for the two model cities Kaysone Phomvihane and Pakse City and to conduct further data gathering from the two satellite cities Outhoumphone and Bachieng Chaleunsouk for the conduct of rapid CRVA. These face-to-face activities came after the national government of Laos has lifted restrictions on social gatherings throughout the country brought about by the COVID-19 pandemic.

In Pakse city, Dr. Soupany Silipounyo, Director of the Provincial Office of Natural Resources and the Environment (PONRE), shared how the city has been severely affected by the heavy flooding in the past years. He also highlighted his appreciation for the Urban-LEDS II project for providing technical assistance to Pakse as one of the model cities. Pakse is considered as one of the biggest cities in Laos after Vientiane Capital and Kaysone Phomvihane. In times of natural disasters, among the most vulnerable areas are the big cities in Laos due to the high population density.

Following the results of the GHG Emissions Inventory, the cities are recommended to prioritize low emission development strategies for the top two sectors with the highest GHG Emissions, namely: stationary energy and waste. These two are followed by the agriculture forestry and land-use (AFOLU) sectors, and the transportation sector. Emissions from the industrial process and product use (IPPU) was not estimated in these inventories as this sector is not considered to be a key source of emissions, especially since there are no existing industries in the two model cities. There exists a huge gap in terms of data collection, especially for the transportation and waste sectors.

Findings from the conduct of the CRVA shows that the biggest threat to the project cities is drought, threatening their major source of livelihood and food security. Further, Pakse City in Champasak Province, is reported to be severely affected by natural disasters such as drought and flood because of its population density. Recommendations from the participants suggest accessing the recorded flood data including flood maps lodged in the Provincial Office of Public Works and Transport.

The conduct of GHG Emissions Inventory and CRVA are relatively new initiatives in local governments in Laos. Urban-LEDS II helps address the resource and capacity gaps to enable cities to carry out these important activities.
Concerning the limited available data, the City Government of Bogor hopes that the MoEF can support the local governments in coordinating with relevant state business entities to contribute relevant data towards GHG emissions and help address the data shortages.