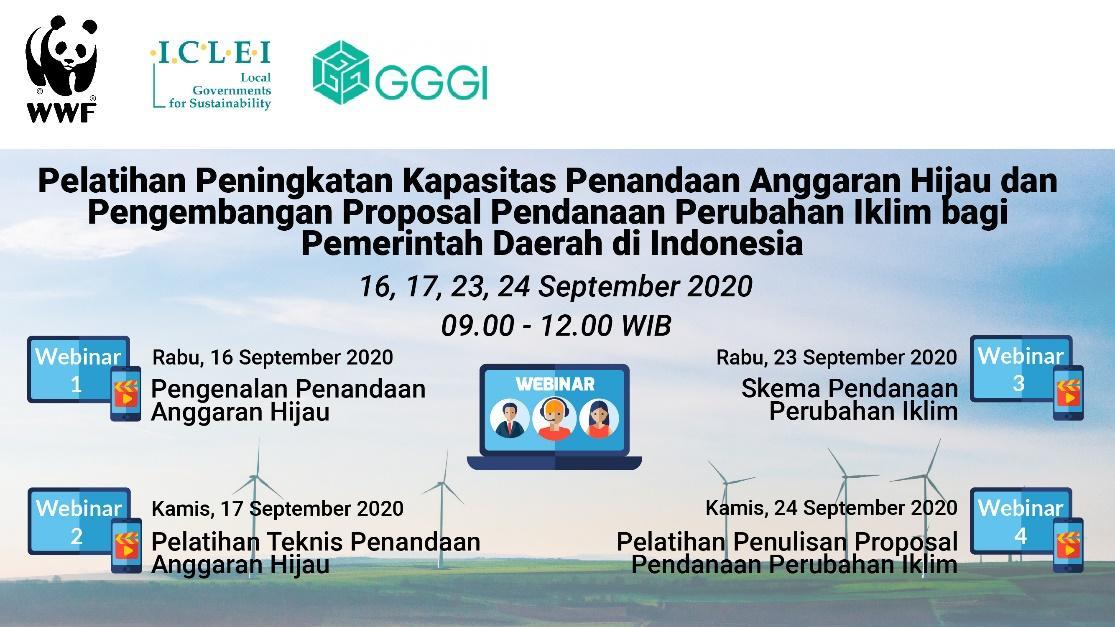 Indonesia – ICLEI Indonesia Office,  in collaboration with the World Wildlife Fund (WWF) – Indonesia and Global Green Growth Institute (GGGI) – Indonesia, conducted  a series of webinars to strengthen capacities of cities of the Urban-LEDS II Project, Ambitious City Promises , 100% Renewable Energy , Jambi City, as well as representatives from Climate Policy Initiative (CPI), and Lokahita on regional financial governance.  Conducted on 16-17 September 2020, the first installment of the two-part series zoomed in on green budget tagging,  while the second leg was conducted on 23-24 September 2020 and focused on creating and developing bankable climate-related project proposals. This series was supported by the Ministry of Home Affairs, and the Fiscal Policy Agency of the Ministry of Finance.

Tag and navigate the ‘green budget’

Local governments play critical roles in planning and regulating the implementation of climate actions in line with the United Nations’ sustainable development goals (SDGs). To accelerate society’s transition from a fossil-fuel based economy a to low-emission, climate resilient economy, local governments and climate change stakeholders have to leverage all forms of climate finance – public, private, domestic, and international – and yield the biggest impact per financial investment made on climate programs and activities.

The participating cities were introduced to the process of green budget tagging, which helped them analyze the current tagging method of performance-based budgeting. With performance as the basis, funded climate-related activities and programs are grouped into six clusters: (1) natural resources protection; (2) agricultural; (3) energy and industry; (4) transportation and governance; (5) health and education; and (6) disaster management. Tagging activities also aims to identify and count the proportion of allocated local government spending realized in the implementation of the green economy.

Ari Mochamad, Country Manager of ICLEI Indonesia Office, emphasized that the activity initiated by Urban-LEDS II project shall help build the capacities of the cities on regional climate finance governance, which can ultimately help them in accessing financial streams and opportunities from funders and multilateral organizations, through Transformative Action Programme (TAP), Green Climate Fund and so on.

Joko Tri Hariyanto of the Ministry of Finance added that while only 20% of the local budget is allocated towards climate actions, cities themselves have the flexibility to mobilize other funding mechanisms such as regional financial governance through green budget tagging and scoring; sectoral funding management; and the creation of incentives and disincentives mechanisms to promote and discourage certain fiduciary performance, respectively.

With the climate crisis being today’s quintessential global agenda, various local and international development organizations have come to the aid of governments in designing and implementing their climate strategies. This calls for a more robust integration of climate change initiatives and programs in local governments’ development plans, supporting the efficient use of their resources and maximizing all possible areas of cooperation. Reforms in political and financial governance are also critical to ensure the sustainability of climate resilience programs.

While some forms of technical assistance are already in place, funding climate programs remain a challenge for many local governments. Noting this, the workshop introduced the participants to alternative funding mechanisms, namely the Green Climate Fund (GCF) and the Transformative Action Program (TAP). This gave cities the opportunity to broaden the scope of financing platforms that they may access in realizing their climate programs.

To cover fundamental and advanced concepts, mechanisms, and processes on regional climate finance, the webinar also introduced the Guidebook on Accessing Climate Financing, which is one of the key products of the Urban-LEDS II project. Rika Lumban Gaol of ICLEI Indonesia highlighted the salient points of the guidebook and underpinned the mechanisms that can help cities access the GCF and other funding institutions. Supported by ICLEI, the guidebook has been prepared in both English and Bahasa Indonesia to ensure more stakeholders can benefit from it.

Emphasizing the fund’s focus on its “catalytic impacts,” Dudi Rulliandi of the Fiscal Policy Agency provided an overview of the Green Climate Fund (GCF) to the participating cities. Dessi Yuliana of GGGI Indonesia further explained that local governments and other qualified stakeholders may access the fund by participating in the fund’s call for Project Concept Note (PCN), which is spearheaded by GGGI Indonesia, or by pitching a proposal directly to Accredited Entities (AE).

To qualify for funding, project proposals must meet five critical criteria – a strong climate rationale, a long-term vision that is grounded on a Theory of Change, country ownership, assurance of sustainability, and value for money as determined by a co-financing scheme.

Developed by ICLEI – Local Governments for Sustainability- the TAP is a project financing and accelerator platform, which ICLEI city members and partners can access in funding their sustainability initiatives. Selamet Daroyni of ICLEI Indonesia discussed the platform, and highlighted how it helps local and regional governments in developing their transformative (ambitious, cross-cutting, and inclusive) projects that may require funding support from external sources. Through TAP, local governments may receive training and other technical assistance, access the Project Preparation Facility (PPF), helping them reach potential investors.