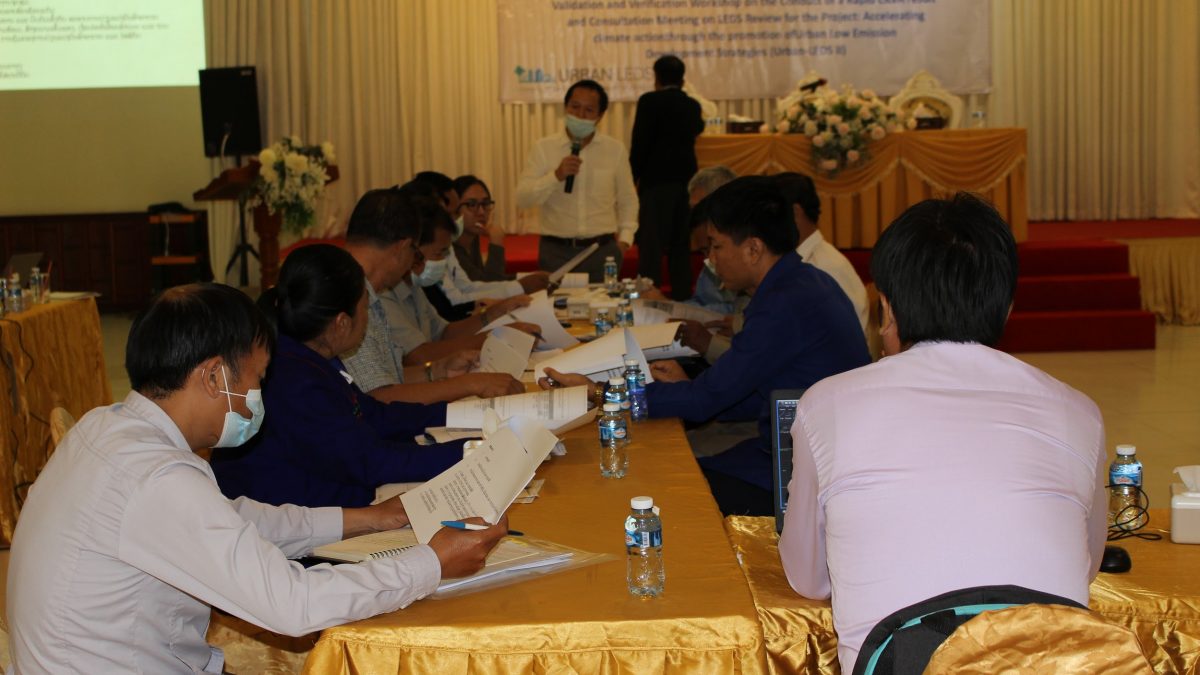 ICLEI SEAS facilitated consultation workshops with the Lao Cities’ technical working groups, core climate teams, and other stakeholders for the development of their LEDS action plans and for the climate risk and vulnerability assessment of the project’s’ two satellite cities – Outhoumphone and Bachieng Chaleunsouk.

Laos PDR – Kaysone Phomvihane City; 27-28 October 2020: ICLEI SEAS organized back-to-back workshops – one for the validation of the processes and outcomes of a rapid climate risk and vulnerability assessment (CRVA) and another on consultation workshop on low-emission development strategy (LEDS) review for the Cities of Outhoumphone and Bachieng chaleunsouk. Delivered under the Urban LEDS-II project, these workshops aimed to validate the project’s assessments of the cities’ climate risks and vulnerabilities, helping the cities formulate and develop their Urban Low Emission Development Strategies (urban LEDS) Action Plan. The said action plan shall center in on climate resilience and ensure its integration into local development planning processes. The workshops brought together the relevant sectors from the cities and stakeholders from different government agencies to gather recommendations in formulating their climate resilience and low-emission development strategies.

The workshop kicked off with a presentation on the greenhouse gas inventories (GHGI) of the Urban LEDS Project’s two Lao model cities namely Kaysone Phomvihane and Pakse City.  Facilitated by LEDS expert and consultant Mr. Mone Nouansyvong, the workshop discussed how the GHGIs are critical starting points to understand how the city GHG emissions can be reduced through their LEDS. Mr. Mone presented the outline of the drafted LEDS Action Plan for the cities, highlighting the cities’ high-emitting/polluting sectors, their levels of emissions, the identified priority stakeholders and potential partners in the implementation of the action plan and the identified relevant policies and mitigation targets at the national and local levels.

This presentation was followed by small group discussions to identify visions, mitigation targets and action plans of each city.

Mr.  Mone also revisited the priority actions and activities on climate change and disaster risk management of the model cities based on the findings of the previous LEDS Review Consultation Meeting in September 2020. To identify the critical priority sectors and high-impact low emission development strategies, the participants were divided into two groups for them to elaborate and select potential demonstration projects out of the five priority activities. The identified activities shall be implemented in the two project cities under the Urban-LEDS II project. Below is the summary of low-emission development strategies that surfaced during the breakout sessions for the Urban LEDs model cities:

The participants agreed that the City Cabinet Office of the two model cities should meet internally to discuss and finalize their decisions and seek approval from the respective mayors within the next two weeks.

On the second day of the consultation workshop, CRVA consultant Mr. Vathanamixay Chansomphou presented the outcomes and findings for the conduct of a rapid CRVA for the two satellite cities namely Outhoumphone and Bachieng Chaleunsouk district. Through a validation process, participating stakeholder groups were given the opportunity to provide technical feedback on the accuracy and local soundness of the CRVA process and outcomes.

During the group discussions, the gaps and limitations on data collection were highlighted, which the participants were able to fill in. These data sets were not collected during the Focus Group Meeting on Data Collection and other previous meetings. Some of these data include the  percentage of population attending school in the village from the District Office of Education, dependence ratio relating to the number of economically dependent (children from 0-14 years and the elderly aged 65 years and older, person with disability), and percentage of population with main activity in the non-farming  sector.

Detailed vulnerability assessment reports are now being prepared based on the findings of the workshop as follows:

The workshops were successful in engaging the stakeholders from different sectors and in achieving their objectives. The participants were highly engaged in making sense of the assessments and providing practical low-emission development and disaster resilience strategies.

The outcomes of the CRVA and adaptation reports for both cities will be critical for the planning and development of appropriate adaptation measures to strengthen their resilience against climate hazards. In the next/final stage on the development of LEDS Action Plan, the team is planning to conduct the validation workshop with the TWGs and relevant stakeholders which will be discussing the process and best practices of mainstreaming the LEDS action plan into the model cities local development plans and proposed policy recommendation to ensure successful implementation of the LEDS action plan.