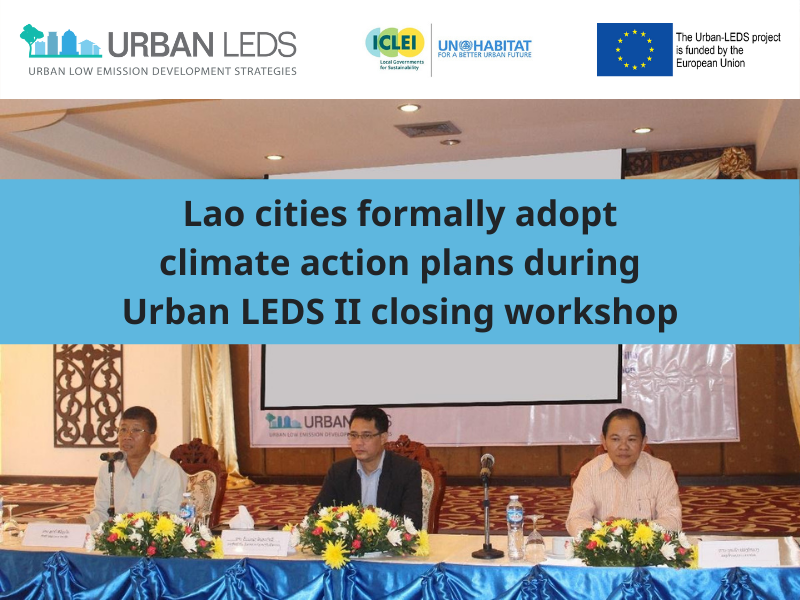 Additionally, the workshop aimed to provide the participating cities with information on the overall project implementation, future plans, and the status and the outcomes of the pilot projects, as well as approval of their Urban Low Emission Development Strategies.

Urban LEDS consultant Dr. Mone Nouansyvong presented the highlights of the Climate Action Plans (CAPs) of the two cities. The CAPs capture the strong cross-departmental and multi-sectoral approach in the identification and  prioritization of strategic climate actions. Moreover, they present opportunities to support national mitigation targets in key sectors such as energy; agriculture, forestry, and other land use (AFOLU); waste management; transportation; resilience projects; and climate finance. Therefore, the LEDS CAPs serve as an effective means to integrate subnational content into the NDCs.

In his address, Mr. Bounthee Saythongvanh, Deputy Director of Greenhouse Gas Inventory and Mitigation Division, Department of Climate Change, MONRE, noted that mainstreaming climate change into local development plans and processes is crucial in accelerating climate action, especially in Lao PDR. As such, building the capacity of government officials is imperative to ensure that they are equipped with the knowledge, skills, and tools to develop and implement strategies that promote low emission development as part of the implementation framework of the CAPs.

Meanwhile, Mr. Vongdavanh Insysiengmai, Deputy Director of the Kaysone Phomvihane City Office of Natural Resources and Environment, brought up the need to increase resources through financial and implementation mechanisms for the implementation of the CAP in the city.

Participants also discussed climate finance data needs and data availability at the city levels, as well as key priorities and strategies for mobilizing and accessing climate finance. The cities will likewise engage with partner institutions, exchange information on their priority needs, and further deliberate on the next courses of action that will allow the Urban LEDS Action Plans to take flight starting with the Implementation Framework for the CAPs.

Pointing out the need to accelerate climate action through climate finance mechanism, Mr. Sommay Songvilay, Vice Mayor of Kaysone Phomvihane City, said that “Cities need support to fully realize their contribution to Lao PDR’s overall National Strategy on Climate Change. Climate finance should be provided and channelled at the local level for the transition towards low emission development pathways.”

Furthermore, Mr. Bounnao Fongkhamdeng, Vice Mayor of Pakse City, added that the Urban LEDS II project has supported Pakse City towards its goal to become a  green city, not only through city-wide efforts towards emissions reduction but to creating viable solutions for its citizens.

“In light of the COVID-19 pandemic, I thank our implementing partners and city governments’ commitment in managing to progress with the project objectives and accomplish milestones that fully align with the national strategy on climate change. We are hoping to sustain this cooperation among cities and project partners even beyond the project completion towards Urban-LEDS III in the future.”, concluded Mr. Soupany Solipounyo, Deputy Director of PONRE Champasak Province.