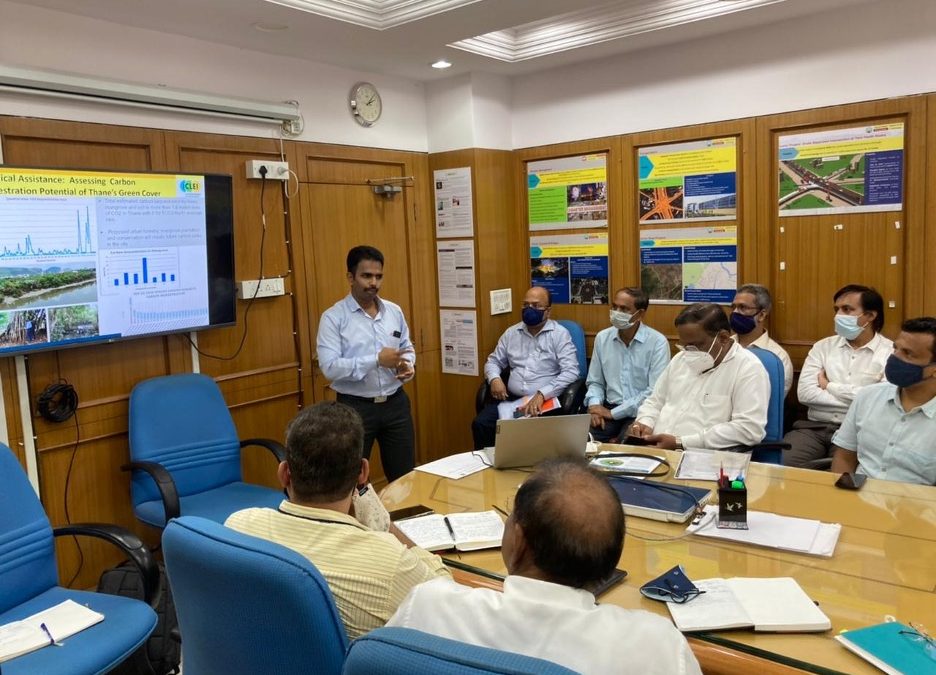 The cities of Thane and Nagpur have been able to accelerate their efforts to mainstream and implement climate action with the support of the Urban-LEDS II project. Both cities have successfully implemented groundbreaking demonstration projects and developed sector-specific strategies and action plans underpinned by technical assessments across priority areas.

With the Urban-LEDS II project concluding in end-2021, meetings were held in Thane and Nagpur to reflect on various activities undertaken over the project’s four-year duration from 2017 to 2021. Municipal officials that are a part of the Core Climate Committee in both cities discussed the results and outcomes achieved to enable low emission and climate-resilient development. The two cities also appreciated the enabling support provided at the city level through the Urban-LEDS II to contribute to national and state-level initiatives on urban climate action such as the Climate Smart Cities Assessment Framework (CSCAF) and Majhi Vasundhara Abhiyan.

Thane and Nagpur now have multi-sectoral Climate Resilient City Action Plans (CRCAPs) in place, to help steer the cities’ ambitions and efforts for bringing down greenhouse gas (GHG) emissions, reducing vulnerability to climate change, and enhancing urban sustainability. The CRCAPs have been prepared through continuous involvement and in close consultation with the cities’ Core Climate Committee. The CRCAPs include climate resilience strategies and interventions across key urban sectors including residential, commercial, institutional, industrial, biodiversity, air pollution as well as in municipal services and facilities such as water supply, wastewater, stormwater, solid waste management, transport, municipal buildings. The prioritized resilience interventions identified in the CRCAPs are informed by the baseline sectoral GHG emissions and climate risks and vulnerabilities identified in the two cities through the Urban-LEDS II project.

In Thane, the meeting held on October 12, 2021, was chaired by Mr. Sandeep Malvi, Additional Municipal Commissioner-1, Thane Municipal Corporation (TMC), and was attended by officials from departments including Information Technology, Regional Disaster Management Cell, Storm Water Management, Electrical Department, Smart City Cell, and the Integrated Command and Control Centre. TMC departments agreed on the mechanism to fully integrate the Thane Urban Flood Alert Network (TUFAN), an early warning system piloted at six locations under the Urban-LEDS II project, in the city’s planning and response for urban flooding and waterlogging. Findings and recommendations from the study to assess the carbon sequestration potential of Thane’s trees and mangroves will be appropriately incorporated by the city in its urban greening and conservation efforts, for instance, to inform plantation of specific tree species with high sequestration potential and ecosystem benefits. TMC reiterated its commitment to adopt the CRCAP and support the implementation of the climate resilience interventions through the Municipal budget.

In Nagpur, meetings were held with key officials of the Nagpur Municipal Corporation (NMC) and the Nagpur Smart and Sustainable City Development Corporation Ltd. (NSSCDCL) on October 29, 2021. Mr. Dayashankar Tiwari, Honorable Mayor, NMC, Mr. Radhakrishnan B., Municipal Commissioner, NMC and Ms. Buveneswari S., CEO, NSSCDCL along with officials of the Environment Division, NSSCDCL, and Public Health Engineering Department, NMC emphasized the city administration’s commitment to adopt the climate action plan and pursue replication and upscaling of the pilot actions implemented through Urban-LEDS II. The project has supported piloting rainwater harvesting systems at two public schools and is equipped with smart sensors to monitor groundwater recharge and quality. Based on a city-wide plan developed for water resource augmentation under the Urban-LEDS II, NMC and NSSCDCL are keen to implement strategies and similar projects at other locations.

Nagpur is keen to improve and better manage its public spaces and biodiversity in order to enhance sustainability and climate resilience. The Urban-LEDS II project helped Nagpur in the development of a Local Biodiversity Strategy Action Plan (LBSAP) along with pilot-scale census and mapping of the city’s trees, creation of a city-wide Natural asset map, and preparation of a pictorial tree handbook. Additionally, a children-centric Climate Resilient Park has been developed to raise awareness among children and their caregivers on climate change and sustainable actions that they can take. The Trikoni Park, located at Bidipeth, has been equipped with place-making interventions and solutions including plantation of local plant species, urban farming, rainwater harvesting, sensory walkway, bicycle track, tree labels, and information boards on sustainable lifestyles.