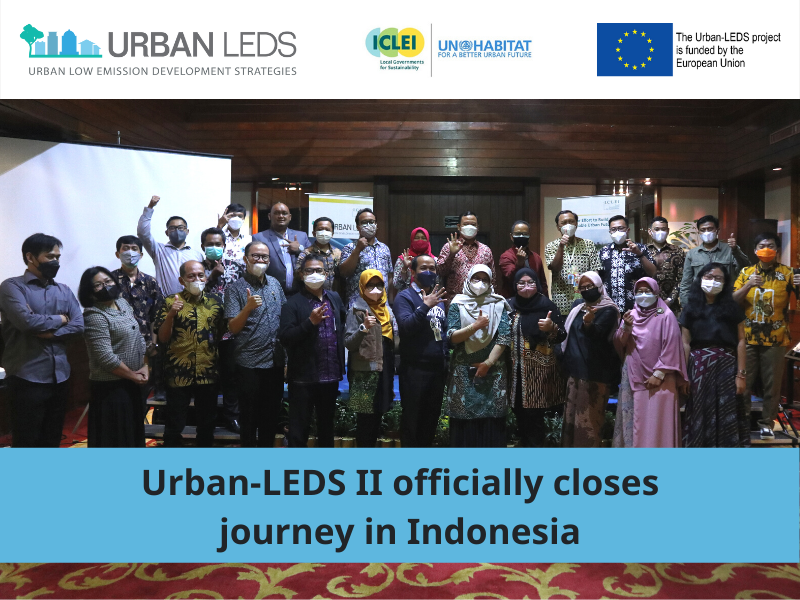 The closing workshop served as a venue to discuss the cities’ insights from the Urban-LEDS II project, their declaration of acceptance of project outputs, and the exploration of opportunities for future collaboration.

Emphasizing his hope for the project’s legacy, ICLEI Southeast Asia Secretariat (ICLEI SEAS) Regional Director Mr. Victorino Aquitania said during his remarks “The work does not stop even as this fruitful project comes to a close. We are hopeful that the project cities will continue to sustain their outputs and outcomes for truly long-term impact.”

Accelerating local climate action and low emission development is at the heart of the Urban-LEDS II project. Mitigation actions at the local government level can greatly support national climate targets.

As such, Mr. Emod Tri Utomo of the National Development and Planning Agency (Bappenas) underscored the need for the integration of LEDS and climate resilience in local development plans. He encouraged local governments to develop Strategic Environmental Assessment – Local Mid-Term Development Planning (locally known as KLHS-RPJMD) in line with the guidelines prepared by the Ministry of Home Affairs (MoHA), the Ministry of Environment and Forestry (MoEF), and Bappenas. These guidelines help local governments formulate realistic and doable climate targets, strategies, activities, and budgeting, thereby translating into significant impact on the ground.

These mitigation actions should then be reported in the National Registry Platform, said Mr. Allan Rosehan of the MoEF. “Indonesian local governments have an important role to carry out regular reporting to the platform. This would help to monitor and evaluate the target achievement upon the Paris Agreement,” Mr. Rosehan added.

Additionally, inter-government and inter-organization cooperation was identified as key areas towards stronger climate actions. Ms. Rima Yuliantari of the MoHA shared that they have issued a regulation called Permendagri 22/2020 and Permendagri 25/2020 to serve as a cooperation guideline for local governments.

Mr. Joko Haryanto from the Ministry of Finance (MoF) meanwhile discussed funding mechanisms that local governments can utilize to support their sustainable development programs. He specified cooperating with national and international organizations as a possible avenue to fund their low-emission development.

Representatives from the Urban-LEDS II Model Cities of Balikpapan and Bogor also shared the valuable lessons they have learned throughout their 4.5-year long engagement with the project.

Ms. Nursyamsiarni Larose, Acting Head of the Environment Agency of Balikpapan City, emphasized the importance of the project outputs, particularly the Greenhouse Gas Inventory (GHG-I) that will serve as a baseline in formulating their development plans.

Mr. Rudi Mashudi, Head of Local Development Planning Agency of Bogor City, recognized that the outputs produced from the Urban-LEDS II project, such as the GHG-I, Climate Risk and Vulnerability Assessment (CRVA), and Climate Action Plans (CAPs), are significant for city development.

In a prerecorded message, Balikpapan City Mayor Mr. Rahmad Mas’ud, expressed his gratitude to ICLEI for its technical assistance and pilot project implementation at Manggar Sanitary Landfill which provides cooking fuel for 50-households in its vicinity.

“This project will continue to be implemented through a CSR program, to reach more beneficiary communities,” said Mr. Mas’ud.

On behalf of Bogor City Mayor Dr. Bima Arya Sugiarto, Mr. Mashudi relayed “The benefits from the Urban-LEDS II project strengthen the direction of Bogor City’s development towards being a Green City, a Smart City, and a Heritage City.” He added that the city is committed to actively combating climate change, with its commitment being reflected in the latest RPJMD period 2019-2024.

Thanking all parties involved throughout the Urban-LEDS II implementation in Indonesia, Mr. Ari Mochamad, ICLEI Indonesia Country Manager said “Climate change adaptation and mitigation should be integrated into the process of development planning.” He also stressed that the reflections and lessons learned from Urban-LEDS II model cities should be leveraged by other cities in order to support the national development agenda.

The Urban-LEDS II project officially began in April 2017 and involved a total of 60 cities in eight countries worldwide, including Lao PDR and Indonesia in Southeast Asia. This initiative was made possible with the support of the European Commission through UN-Habitat and ICLEI’s Urban LEDS project team who worked directly with local and national governments and key stakeholders to accelerate the low emission development process while also embedding adaptation co-benefits.