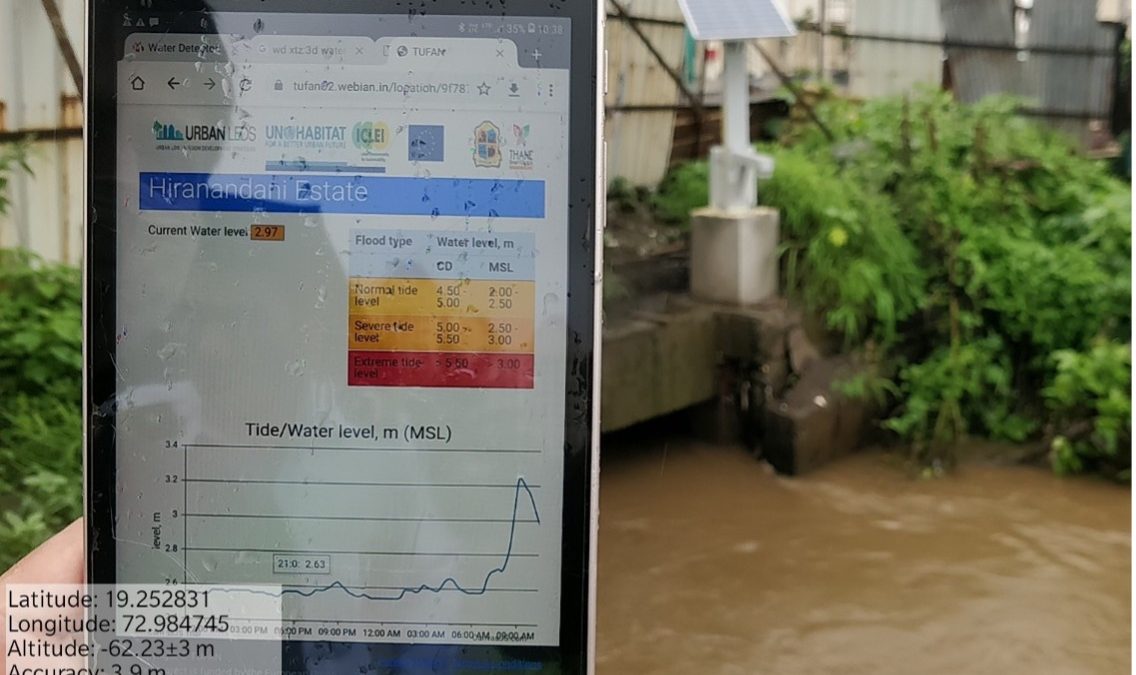 Thane city has completed the implementation and integration of an early warning system called the Thane Urban Flood Alert Network (TUFAN), to help better address the incidence of waterlogging and flooding in the city. The real-time warning system comprises four ultrasonic water-level sensors, two radar-based water-level sensors, and an automatic weather monitoring station. Real-time information captured by the sensors is shared through a webpage. A technical study on carbon sequestration potential highlighting the importance of urban vegetation has been completed.

The frequency of high-intensity rainfall in the Urban-LEDS II model city of Thane, located close to the Arabian Sea, is increasing. The city is susceptible to flooding and waterlogging when high-intensity rainfall coincides with tidal variations that impact the water levels in the Ulhas River estuary and Thane Creek, the city’s main water bodies. Having completed the implementation of the IoT-based TUFAN system, Thane Municipal Corporation (TMC) is now better equipped for improving its preparedness, reducing the response time of emergency services, and safeguarding human health and assets during incidents of waterlogging and flooding.

A detailed technical study was conducted to assess the feasibility and to identify key locations for deploying sensors to monitor real-time water levels. The study looked at the areas that experienced frequent waterlogging, the micro-catchment areas, runoff contribution, rainfall trend, tidal influence, and interconnections among major water bodies such as the Ulhas River estuary, Thane Creek, and stormwater drains (nallahs).

Based on the analysis, six strategic locations (Saket, Gaymukh, Hiranandani Estate, Thana College, Vrindavan Society, and Mumbra) were identified for the deployment of the sensors. In addition, an automatic weather station has been set up to record rainfall and other parameters for understanding rainfall intensity and runoff generation. Detailed hydrological modeling has been conducted for nallah no. 3 (west) from Kacharali Lake to Thane Creek based on the rainfall intensity and catchment characteristics. Excess runoff from this nallah impacts several areas vulnerable to waterlogging (Vandana theatre, Kopari Subway, and Ram Maruti Road, among others) in the core city, and hence, warnings by the TUFAN system enable key TMC departments to take precautionary actions such as diverting traffic and disseminating information.

The remaining five sensors track water levels on a real-time basis. When water levels at the five locations exceed threshold flood levels, the concerned officials are informed through the TUFAN system. All data is communicated through the IoT platform and analysed at the Integrated Command and Control Centre of TMC, using a model developed under this project.

The TUFAN system was tested successfully during the monsoon season of 2021 for real-time monitoring and forecasting. Officials from various departments of TMC have been trained to have a better understanding of the system and its operations, and on using the sensor information for their planning and appropriate responses during flooding/waterlogging incidents. The TMC and Thane Smart City will further strengthen the warning mechanisms to reach out to key officials and vulnerable groups through various means. TUFAN is a pioneering system in the region, in terms of real-time monitoring, economic forecasting, and providing comparatively accurate warnings at the city level.