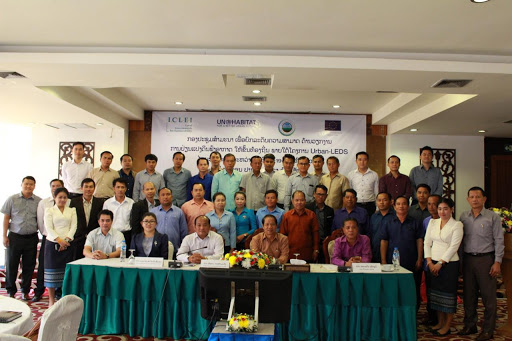 Pakse City, Lao PDR – ICLEI Southeast Asia Secretariat and UN-Habitat organized  a a capacity building workshop with cities in Laos PDR last 17 to 19 July 2019. Over 40 individuals representing national, provincial, and local governments participated in the activity. The workshop aimed to raise awareness about the basics of climate change, low emission development and the relevant national and international frameworks that promote climate action and emissions reduction.

In his address, Mr. Phethphoumy noted,  “to start the LEDS process in the project cities, the local government officials should have a better understanding and capacity on climate change which all climate actions can be taken once they have been built.”

The basics of climate change and relevant international frameworks and agreements

As the first installment of a series of capacity-building training-workshops for Laos under the Urban-LEDS II project, this activity provided the participants with the basics  of climate change including weather versus climate, climate variability, adaptation and mitigation actions, global warming phenomenon, the greenhouse effect, and its impacts.

Further, international frameworks for climate change such as the climate convention at the global level (Paris Climate Agreement) and the Nationally Determined Contribution (NDC) as well as the national climate adaptation and mitigation policies and strategies were also discussed.

The participants also conducted a group exercise on climate vulnerability and risk identification. Through this exercise, the representatives were able to identify and map their respective cities’ vulnerable sectors.

To support comprehensive and inclusive climate action planning, a discussion about ICLEI’s GreenClimateCities (GCC) framework was also conducted. GCC is a framework tailor-made for local and regional governments to provide them with guidance and support to analyze, act, and accelerate climate action by integrating low emission development into policies, plans, and local processes.

Mainstreaming climate change and environmental sustainability into local development plans and processes is crucial in accelerating climate action, especially in Lao PDR. As such, building the capacity of government officials and technical staff is imperative to ensure that they are equipped with the knowledge, skills, and tools to develop and implement strategies to promote low emission development.