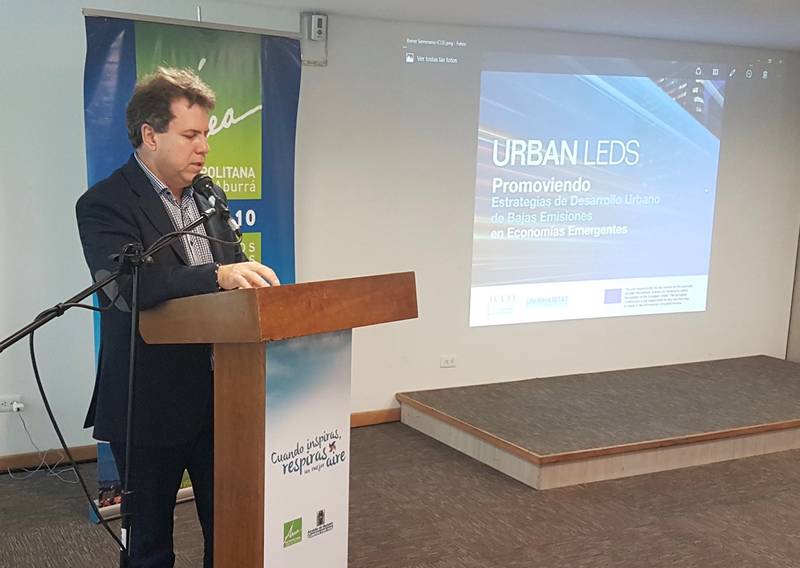 Due to the regional relevance of Colombia in sustainable development, by supporting the implementation of projects and other initiative, ICLEI – Local Governments for Sustainability launched its most recent coordination office in Latin America in Colombia. The occasion was characterized by a two day workshop to mark the launch and kick-off of the Urban-LEDS II project in the country.

The announcement was made just months after the last United Nations Conference on Climate Change, COP23, calling for greater commitment from nations and cities to curb rising global temperatures. Building on a solid partnership with the Metropolitan Area of Valle del Aburra (AMVA), which has its headquarters in Medellín, the executive secretary of ICLEI South America, Rodrigo Perpétuo, and the AMVA director, Eugenio Prieto, together with representatives from the UN-Habitat and the European Union officially launched the country office in February this year (2018).

On this occasion, an event was held to present the team that will be responsible for ICLEI’s activities in the country. Two days of workshops were also held to launch and start the activities of the Urban-LEDS II project. Funded by the European Commission and implemented by UN-Habitat and ICLEI, the project aims to address climate change through the promotion of Urban Low-Efficiency Strategies in emerging economy countries (Brazil, Colombia, India, Indonesia and South Africa) and least developed countries (Bangladesh, Lao PDR and Rwanda), providing selected local governments with a methodology for integrating climate strategies into urban planning.

The workshop marked the starting point for the implementation of the project in Colombia, which will continue until 2021. The objective of the workshop was to bring together the main actors for the development of low emissions in the municipalities of Colombia to identify existing actions, potential synergies and raise inputs for the strategy design and specific project activities in the country. In particular, the workshop sought to map aspects of the experiences and methodologies in use, its guidelines with national and departmental policies and gaps for the advancement of actions in cities, with attention to technological aspects, business models and access to resources.

Although Colombia has a low participation in total global emissions, only 0.37%, the country has occupied a worrisome place due to emissions related to changes in land use and deforestation. The negative consequences such as the increase in natural disasters are perceived more frequently, directly impacting the well-being of the population and the country’s economy. Colombia, like many other countries in Latin America and the Caribbean, is a country very vulnerable to the effects of climate change, mainly due to the geographic and climatic characteristics of the entire region, as well as socioeconomic and demographic conditions. Among the main sources of Colombian emissions are the deforestation, agriculture, transportation, energy, manufacturing and construction industries.

At the national level, the Urban-LEDS II project will explore and support synergies and the multilevel integration of climate change policies among levels of government, providing inputs and dialogues so that national implementation and funding strategies of NDCs consider and strengthen local actions.

The workshop aimed to bring together institutions that have potential synergy with the actions proposed by the project in order to collect their strategic visions and design activities to achieve the best impact for the project.

The workshop aimed to bring together institutions that have potential synergy with the actions proposed by the project in order to collect their strategic visions and design activities for the project to achieve the best impact.

The methodology used in the workshop was presentations of the project and the Colombian context, followed by exercises and discussions. Practical exercises to identify elements and tools helped to contribute for the definition of efficient project implementation in selected cities. Four dynamics were performed and their results can be seen below: