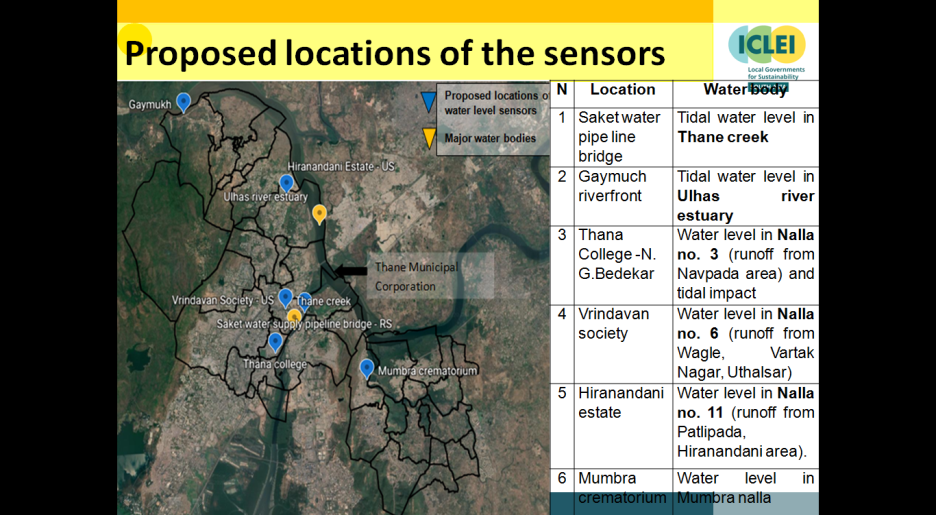 Officials of Thane Municipal Corporation (TMC) reviewed the implementation of Urban-LEDS II project activities in a meeting held on March 19, 2021. Discussions focused primarily on the implementation of a demonstration project on early warning system for flooding in Thane and on preliminary findings of the city’s climate risk and vulnerability assessment.

Thane city is susceptible to flooding and waterlogging, when incidences of high intensity rainfall coincide with tidal variations that impact water levels in the Ulhas River estuary and Thane Creek, the city’s main water bodies. To improve its resilience to impacts of this climate risk, the city is undertaking a pilot project to develop an early warning system for flooding and waterlogging, through the support of the Urban-LEDS II project. This Internet of Things (IoT) based real-time early warning system will enable quick response from the city administration and citizens during incidents of flooding. An expert consultant and the ICLEI South Asia team worked closely with TMC officials to conduct a feasibility study to understand the baseline situation and identify priority locations to be targeted through the demonstration project.

A meeting was held to present the findings of the feasibility study to TMC officials and agree upon the implementation plan of the demonstration project. Thane’s Climate Core Committee, comprising of officials from the TMC departments and established to steer the city’s climate actions, primarily participated in the deliberations. The meeting was held at TMC’s main administrative office and was chaired by Mr. Ganesh Deshmukh, Additional Municipal Commissioner 1 (ADMC 1), TMC and the Chief Executive Officer (CEO) of Thane Smart City Ltd., with the assistance of Mr. Sudhir Gaikwad, Nodal Officer and Chief Technical Officer (CTO) of Smart City Cell. Representatives from TMC departments including Storm Water Management, Pollution Control Cell, Information Technology, Regional Disaster Management Cell, Electrical Department, Smart City Cell, and the Integrated Command and Control Centre joined the meeting.

From the feasibility study, six locations were identified for installation of water-level sensors through an assessment of the overall water logging scenario, rainfall trend analysis, and reasons and locations of water logging. The study recommended that radar based sensors be installed at two locations in the Ulhas River estuary and Thane Creek, and ultrasonic sensors be deployed at four major nallahs (natural drains), enabling the early warning system to cover nearly 60% of the city’s area. In addition, one automatic weather monitoring station is proposed to be installed at the city’s Integrated Central Command and Control Centre (ICCC). The details of proposed locations were presented to the participants, with catchment areas, indicative water logging locations, and criticality discussed for the corresponding water bodies.

The pilot early warning system will be designed to forecast flooding based on real-time information including water levels in the natural drains, tidal ingress, and rainfall. The operational modalities of the system along with proposed threshold criteria (water levels in terms of Chart datum (CD) and Mean Sea Level (MSL)) to determine flood warning alarms were explained to TMC officials. Roles and responsibilities of various TMC departments to operationalize the pilot system were also discussed in the meeting. Participants deliberated on the utility of the information to be captured through the sensors and early warning system, including dissemination of warning to citizens.

During the meeting, inputs were also sought by ICLEI South Asia based on preliminary findings from Thane’s Climate Risk and Vulnerability Assessment (CRVA) and implications of climate risks on the city’s infrastructure and urban services. The linkages of project activities such as the GHG emission inventory and the CRVA to the Government of India’s reporting framework on climate action, the Climate Smart City Assessment Framework (CSCAF), were also explained to the participants. In their concluding remarks, TMC officials appreciated the support offered by the Urban-LEDS II project and partners to the city and highlighted the city government’s commitment to improve its climate resilience and sustainability of urban services through the effective use of smart measures.