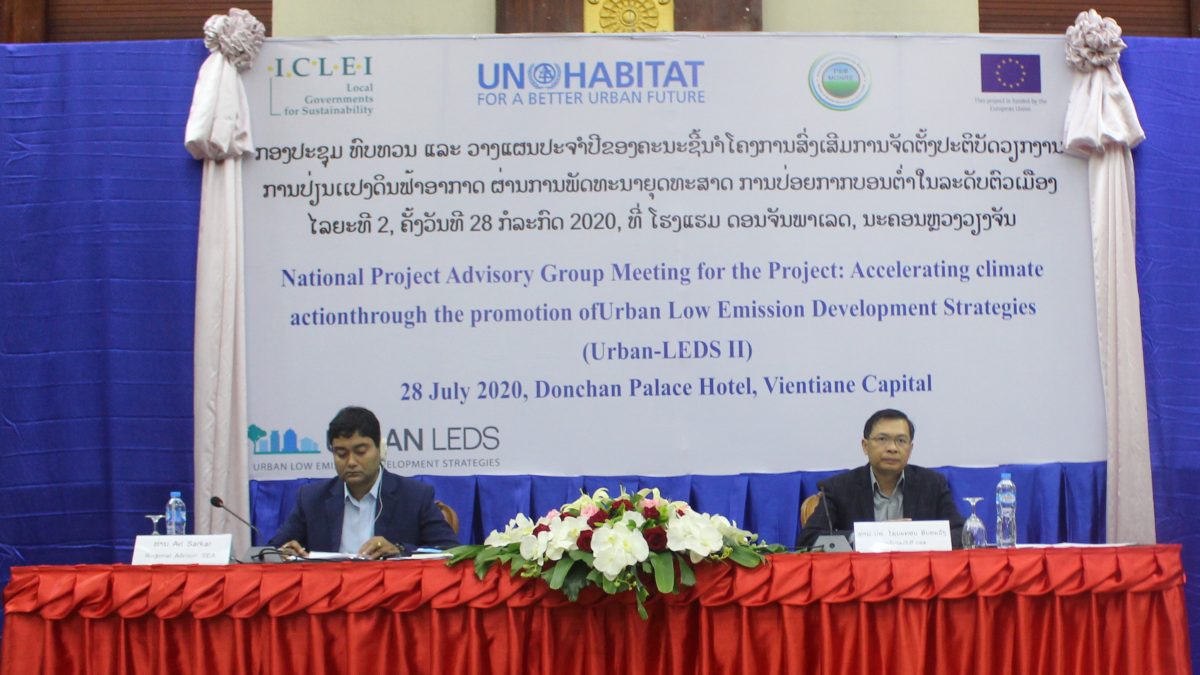 The second NPAG Meeting for Lao PDR was conducted on 28th July 2020 in Vientiane City. The event aims to provide updates regarding the Urban-LEDS II project implementation, particularly to present the findings of the recently conducted GHG inventories and climate risk and vulnerability assessments for model cities, Pakse and Kaysone Phomvihane.

The NPAG was created early in the implementation of the Urban-LEDS II to enhance vertical integration of LEDS and to broaden project outreach by creating synergies with existing and proposed initiatives along with the priorities and strategies of the national government.

HE Dr. Saynakhone Inthavong, Vice Minister of National Resources and Environment (MoNRE), expressed his appreciation to the project partners, UN-Habitat and ICLEI, and the EU, and the government representatives attending the meeting. He emphasized the significance of the project towards reducing GHG emissions through the development and implementation of LEDS at the local level.

Dr. Avi Sarkar, UN-Habitat’s Regional Advisor: South-East Asia Urban Basic Services Branch, served as the co-chairman of the event. He welcomed the participants and provided an overview of the Urban-LEDS II project’s work and mission to help city governments achieve their sustainable goals.

The activity served as a platform to provide updates regarding the implementation of the Urban-LEDS II project, present results, key findings, and recommendations based on the conduct of the greenhouse gas emissions inventory (GHGi) and the climate risk and vulnerability assessment (CRVA) for the model cities; and obtain feedback and recommendations from the participants and stakeholders.

The members of the NPAG provided recommendations and suggestions to ensure smoother coordination with the project cities and achievement of project objectives: In terms of developing low emission development demonstration projects, the Department of Climate Change (DCC-MoNRE) suggested to take advantage of the adaptation co-benefits when implementing mitigation actions. The NPAG members also expressed interest towards conducting virtual exchanges as a way to learn about LEDS initiatives in other project countries.

The CRVA consultant has also suggested some interesting plans to be considered for developing the pilot projects including the introduction of an early warning system to the people living in the most vulnerable areas, improving and maintaining drainage systems, infrastructure that are climate resilient, and identifying evacuation centers in times of disasters, among others.

During the meeting, HE Dr. Saynakhone highlighted the more ambitious conditional mitigation scenario towards achieving net zero GHG emissions by 2050 from Lao PDR’s Third NDC. He added, “it is crucial to have the support of the private sectors and he commented that the Urban-LEDS II project will contribute to the goal which is to reduce the GHG emission through the development and implementation of LEDS at the local level.”

In his final comments, HE Dr. Saynakhone Inthavong from MONRE encouraged ICLEI SEAS to keep up the good work and sensitize local governments. He also encouraged local governments in the selected project cities to come out with strong policy/project recommendations/commitment, which can then be implemented with support from the central government and ICLEI SEAS.